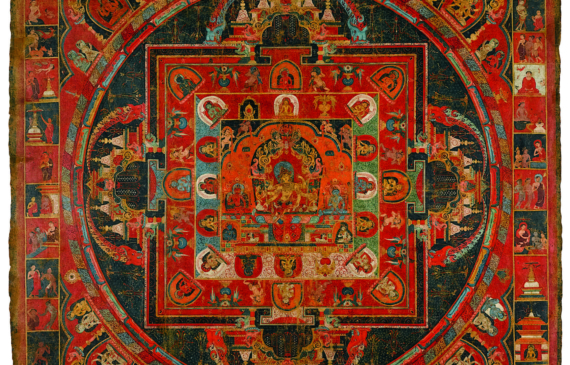 Published & Exhibited:
Nepal: Where the Gods are Young, The Asia Society, New York, 1975.
Himalayas: An Aesthetic Adventure, The Art Institute of Chicago, 2003. 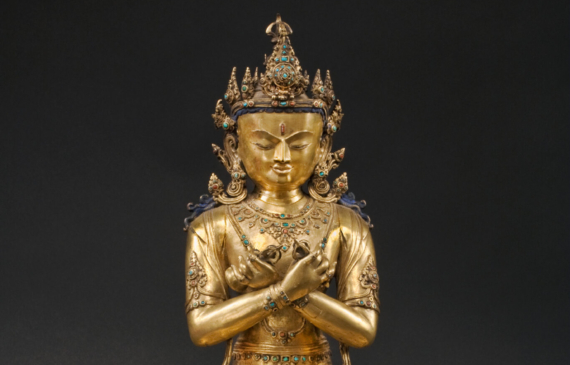 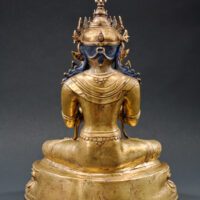 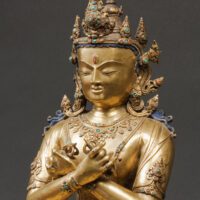 The Yuan Dynasty in China was founded by Kublai Khan, grandson of Genghis Khan, the fifth Great Khan of the Mongols in 1271. Genghis Khan had advised Kublai’s mother Sorghaghtani to choose a Buddhist Tangut woman as his nursemaid, and this was the first step for the future Emperor’s affinity and respect of Buddhism and its principles. A rich cultural diversity developed during the Yuan dynasty, and Tibetan Tantric Buddhism flourished as a result of Tibetan influence. Kublai Khan created the title Imperial Preceptor for the Sakya Lama, Chogyal Phagpa (1235 – 1280), who assisted the Khan in his endeavor to bring all of China under Mongol rule. Phagpa brought Aniko, a Newari artist from Nepal, with a group of other artists to Khan’s court to create a golden stupa at Dadu (Beijing). It is possible that this fine gilt bronze was cast in the imperial workshop by one of the Newari artists.

According to the Gelug and Kagyu schools of Tibetan Buddhism, Vajradhara (bearer of the thunderbolt) is considered the supreme essence of all Buddhas. Vajradhara is believed to have appeared before Tilopa, the founder of the Kagyu school of Tibetan Buddhism. Per Kagyu principles, Vajradhara represents the historical Buddha’s realization of enlightenment. Seated in dhyanasana (diamond posture) with his hands in vajrahumkara mudra (victory over three worlds) holding the vajra (thunderbolt) and ghanta (bell), Vajradhara wears a robe beautifully decorated with flowers and quatrefoil medallions with dragons and phoenixes enclosed within them. The dragon and phoenix represent the union of heaven and earth, and symbolically the Emperor and Empress. Richly adorned, Vajradhara wears an elaborate necklace, foliate armbands, anklets and a beaded belt all inset with turquoise and coral. Only a few loose locks are shown strewn over his broad shoulders, his head covered by an ornate five tiered crown completed by a vajra finial.

The script at the base of this marvelous work is in the Lantsa script has been transliterated by Dr. Gautama Vajracharya as follows:

Most likely this text represents a mantra in hybrid Sanskrit and Tibetan, although its exact origin is as yet unidentified. This script slightly varies from the Ranjana script which originated in Nepal. A bronze of Sakyamuni of a slightly later period in the Reitberg Museum, from the Berti Aschmann collection, is published by Helmet Uhlig (1995, plate 13, pg. 52) with a similar square shaped inscription.