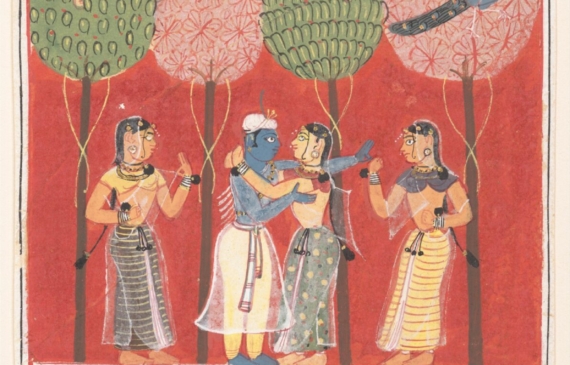 Krishna Revels with the Gopis: Page from a Dispersed Gita Govinda (Song of the Cowherds)
India, Madhya Pradesh, Malwa
circa 1630-1640

A girl with curving hips, bending to whisper in his ear,
Cherishes her kiss on her lover’s tingling cheek.
Hari revels here as the crowd of charming girls
Revels in seducing him to play.
—Gita Govinda, canto 1, verse 41

This illustration faithfully adheres to the text, presenting Krishna (Hari) on the bank of a river surrounded by admiring cow maids (gopis). However, it is the color play of the natural elements, populated with birds and monkeys, that animates the scene. With its wavelike cloud pattern and distinct figure type, this work typifies the early Malwa stylistic vocabulary. 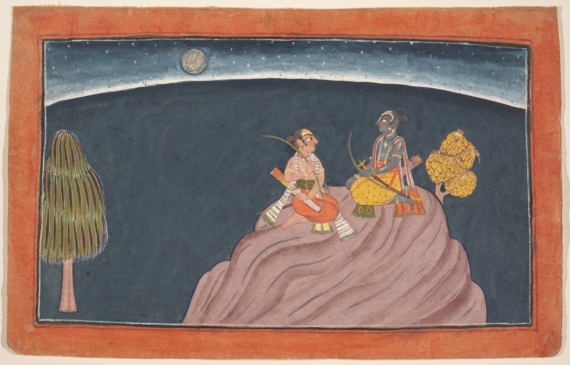 Rama is shown with his brother at the summit of Mount Pavarasana passing a sleepless night after searching in vain for his wife, Sita, who has been abducted by the demon Ravana. Her fate is as yet unknown to Rama,so his fear has not yet turned to anger. The Ramayana emphasizes the vast territory they have covered and the desperate nature of their search, suggested by the featureless expanse leading to the curving horizon, marked by a silver moon.

This painting belongs to the Shangri Ramayana series, which is associated with a number of Punjab court styles, suggesting that it was the product of itinerant artists who worked for a number of patrons in the region. This folio is most closely associated with the atelier at Mandi, known for its simple but compelling compositions.

Inscription: Inscribed in devanagari on verso: 118 kiskindha (numerals in takri)