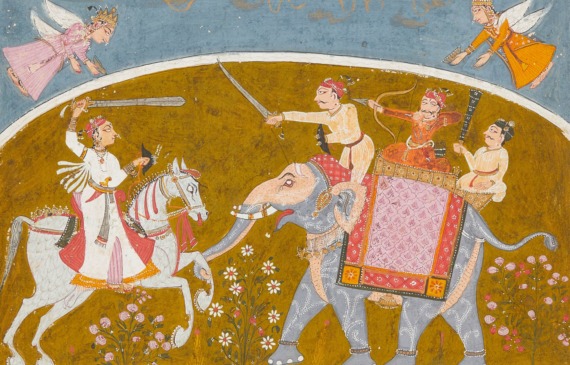 An Illustration to a Ragamala Series: Nat Ragini
Datia
Circa 1725
Opaque watercolor heightened with gold on paper

Ragamala or ‘Garland of Melodies’ paintings are visualizations of the ancient classification system for Indian music. Ragamalas are the melodies that become templates for improvisation within Indian music. While each melody has a certain structure, there are infinite songs that can be produced within each mold. These melodies are generally categorized into six male personifications, or ragas, who are each accompanied by five wives, or raginis. The ragas are all in the stronger and more coherent pentatonic scale, while the raginis are in the heptatonic scale, which contains melodies with more contrasts and subtleties, and are thus considered more feminine.

Each of the thirty-six ragas or raginis are a pictorial embodiment of a particular musical mood or sentiment, often having to do with “love in union” or “love in separation.” They are meant to evoke the feeling or color of the melody rather than a specific narrative. The six principal ragas are each meant to be performed during the six seasons of the year: summer, monsoon, autumn, early winter, winter and spring. The raginis, too, are often attributed to certain regions or times of day.

Depicted here is the Nat Ragini, an afternoon melody. Nat Ragini is one of the wives of the Bhairava Raga. The Nat Ragini, although feminine, is depicted as a warrior on horseback. With her sword raised, she comes face to face in battle with a war elephant and its three riders. Scholar Kalus Ebeling notes: “It is hard for the uninitiated viewer of Ragamala paintings to reconcile the concept of female ragini with the male images of battling warriors…While most ragamala paintings are conceived in a devotional or erotic mood, Nat visualizes music of a heroic mood” (K. Ebeling, Ragamala Paintings, Basel, 1973, p. 37). Thus, the fact that these depictions are not literal, but instead meant to be evocative of a particular feeling, allows for this subversion of gender norms.

While typical Nat Ragini scenes are filled with the violence of battle, often featuring dead and decapitated soldiers, this depiction is relatively restrained. Instead of dead bodies, the battle ground is interspersed with detailed florals, which also decorate the lower register of the painting. Enclosing the scene is a curved horizon, above which two angels appear to be raising their cups towards each other as if in celebration. The marble architectural element atop which this scene takes place, as well as textile-like niches on either side of a manmade lotus pond within, are the Mughal elements that distinguish this Datia painting from the earlier Rajput Malwa painting style it owes homage to.