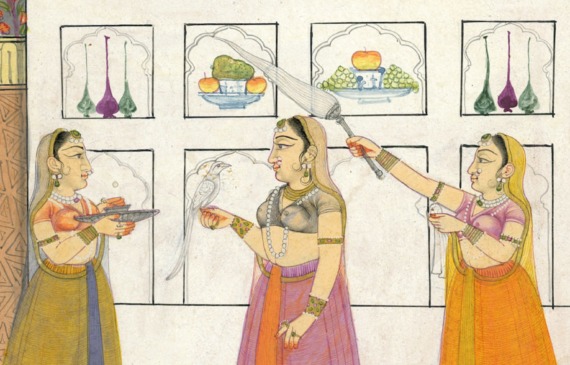 Though this specific Ragini has not yet been catalogued, it may be Malai Ragini, a noblewoman flanked by two attendants – one fanning her with a fly whisk, the other offering her a tray. 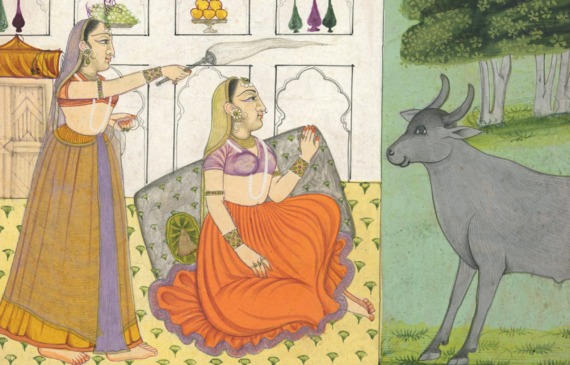 Especially affluent in the Bilaspur region, Ragamala painting was a favored subject of many rulers, courtesans, and artists alike. Ragamalas depict ragas, or musical melodies, to blend the various mediums of culture. This type of painting systematically employs iconography, musical modes, and poetry to represent a particular emotion, and time of day and year. This work captures Vairati Ragini, the first wife of Shri Raga, a Ragini described in the poet Kshemkarna’s 16th century Ragamala. Kshemkarna, also known as Mesakarna, compiled older, unknown sources into his Ragamala that detail six ragas, each with five raginis (wives), and eight ragaputras (sons), describing each musical mode as a personality of divine or aristocratic figures. He also matched each tune with the voice of an animal or sound of some sort of human activity.

The visual image of Vairati Ragini is detailed by Kshemkarna in verse 100 as a woman and her sakhi appreciating the cool wind of a fly whisk, while comparing the associated music to the voice of the water buffalo. The animal is illustrated here, appearing quite bull-like, approaching the two women with a pleasant expression on his face. For an earlier Bilaspur painting of this subject, see Vairati Ragini: Two Maidens Seated in a Pavilion Visited by a Grey Bull, sold at Bonhams’s London on April 25, 2017, lot 293.

A nimbate Mughal ruler, likely a stylized image of Emperor Aurangzeb, is shown seated on a silver throne, leaning against a golden floral bolster as he gives audience to a delegation of six gray-bearded Muslim ministers who stand before him respectfully, perhaps seeking appointments as governors or envoys.  The scene evokes cold overtones, as it is most likely winter-time in the Punjab Hills.  The figures can be discerned as Muslims by their long winter jamas which are tied to the right (unlike Hindus who tie to the left), the style of their boots and the manner of their neatly trimmed beards. The emperor is seated on the terrace of an outdoor pavilion, beneath a golden parasol, impatiently handling a strand of prayer beads while an attendant stands behind him waving a flowing chowrie.

Several features of this work are indicators of a Bilaspur origin: the overall color palette with its flattened darkish green-blue landscape accentuated by short parallel strokes of dark green ground; the patterned lines of trees and small bushes throughout the landscape; and the prominent striped rug beneath the feet of the subjects. Moreover, the painting is composed in a pothi (horizontal) format.

The work is uninscribed so one cannot be sure of the figures’ identities . However, their faces, defined with individualizing features and distinctive beards, are painted with Mughal naturalism, leaving open the possibility of future identification.  The characters serve as representations of real individuals rather than idealized types.