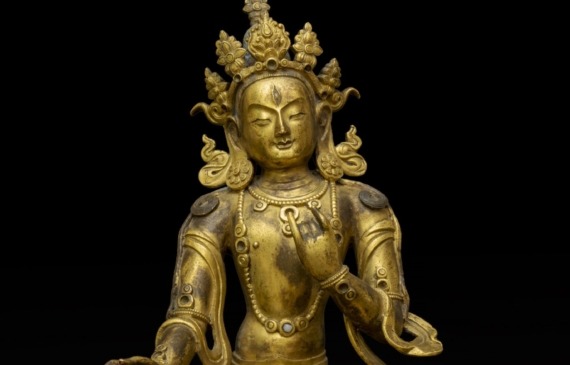 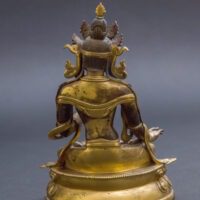 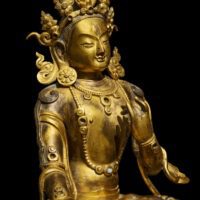 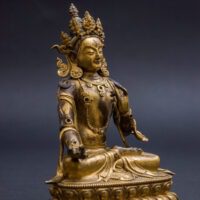 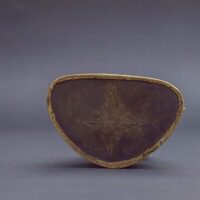 Provenance:
From a private American collection.

Cast seated in dhyanasana on a double lotus base, the right hand lowered in varadamudra, the left hand raised to his chest, wearing an elaborate beaded necklace, the face with downcast eyes and meditative expression framed by a five-pointed crown securing the hair swept in a top knot, with his bare torso adorned with inlaid beaded jewelry. Avalokiteshvara has long been regarded as the patron deity of Tibet, and has been revered in China from the late Ming dynasty through the Qing. Qing court patronage of Buddhism commenced under the Kangxi Emperor and reached epic proportions under his grandson, the Qianlong Emperor. The Buddhist centers of Beijing, Rehol, and Dolonnor produced a vast number of images to keep up with the demand of temples both inside and outside of the capital. The present work exhibits many characteristics common to the Buddhist workshops of the Qianlong period, such as the languid and slightly effeminate treatment of the face and body, and the tightly waisted double-lotus base with broad petals. This sculpture has a pacifying beauty and presence, a very fine example amongst the great number of similar Buddhist bronzes proliferated during the Qianlong period. This gilt bronze excels in its elegant modeling with finely cast hands and fingers. 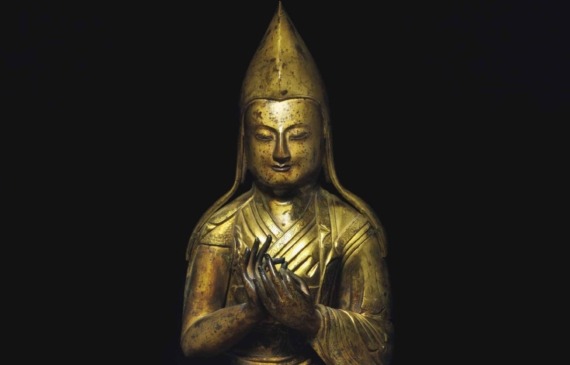 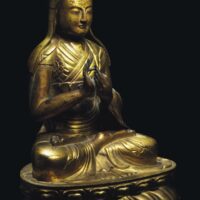 Provenance:
From the collection JF Chen.
Acquired in NY in the 1970’s.

Tsongkhapa, also known as Je Rinpoche, was born in the Amdo region of Tibet in 1357. He was a highly respected Buddhist scholar and is credited as being the founder of the Gelug Buddhist sect, known as the “Yellow Hat” sect, one of the most powerful and widespread in the Buddhist religion. Revered as an incarnation of the Bodhisattva Manjushri, he was reported to have seen and conversed with the deity from a young age. The current bronze example can be seen holding the stems of lotus flowers
supporting a sword and book, which are the prime attributes of Bodhisattva Manjushri.
Compare this powerful piece with a related gilt-bronze figure of Tsongkhapa, 18th century, illustrated in B.Lipton and N.D.Ragnubs,Treasures of Tibetan Art: Collections of the Jacques Marchais Museum of Tibetan Art, p.70, no.22.