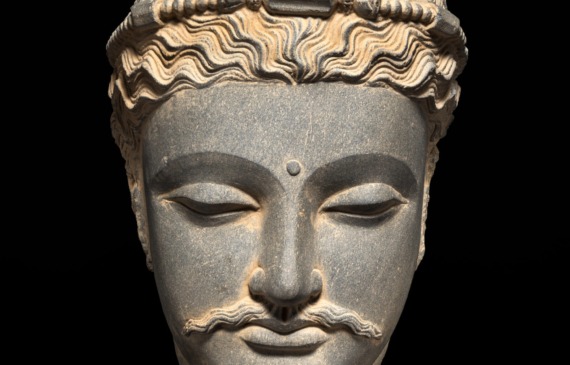 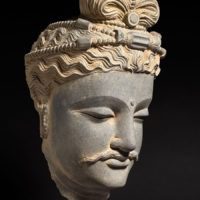 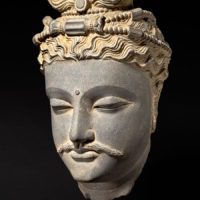 A gray schist head of a bodhisattva
Ancient region of Gandhara, 2nd–3rd century
13 in. (33 cm.) high

Provenance:
Private Belgian collection, acquired in the 1960s, by repute.

The present sculpture is finely carved and finished with smooth polish over the stone’s fine grain. His broad straight forehead in the classical style offset with a raised urna, his face bearing a deeply meditative expression, with downcast eyes and strong aquiline nose, a stylized curled mustache over bow-shaped lips. The cheekbone and chin are sculpted in a commanding manner.

The style of his topknot is generally assigned to Maitreya, as in an example from the Avery Brundage Collection (B60S597), see The Asian Art Museum of San Francisco: Selected Works, 1994, p.23. The wavy hair style and the use of classical ornament underscores the Hellenistic influence on Gandharan art. The elegant hair dress and facial characteristics of the present work draws close comparison to another head of a bodhisattva in the Los Angeles County Museum of Art, see Pratapaditya Pal, Indian Sculpture, Vol. 1, Los Angeles, 1986, p. 168, Cat. No. S46. 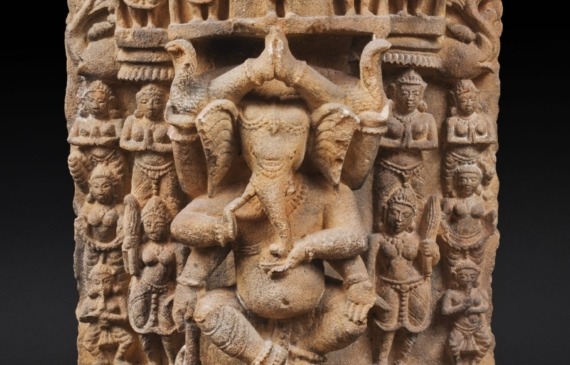 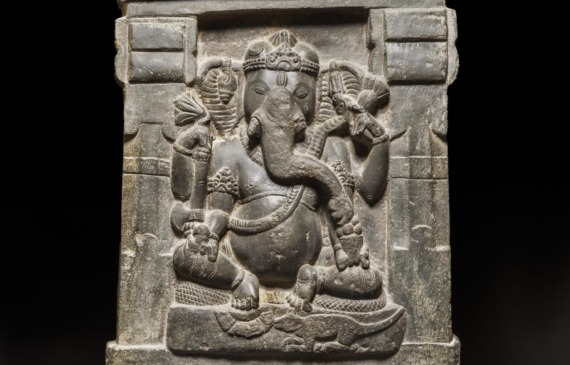 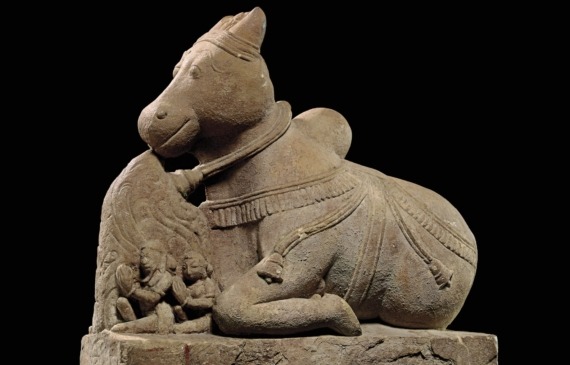 Sacred white bull and vehicle of Shiva, Nandi serves as guardian, gatekeeper, and mount to the mighty destroyer god. Nandi has been identified as Shiva’s vehicle, or vahana, as early as the Kushan period in the first century CE and has been a subject of exaltation throughout India, Vietnam, Cambodia, and Indonesia. Some claim that reverence for bovines in the Hindu religion stemmed from the status given to Nandi as Shiva’s vahana, especially in Uttar Pradesh. Sculptural forms of the bull frequently appear outside of temples dedicated to Shiva and are positioned to face the sanctuary where the main representation of Shiva would be located to demonstrate his reverence of the god. In the present figure, the worshippers positioned in front of Nandi were likely included to represent additional devotion, as they would be facing the most highly regarded space in the temple complex. Nandi sculptures are so prolific at these sites of worship that it is rare for a Shaivite temple to be missing an image of the bull.

In the Ramayana, it was Nandi who cursed Ravana, king of Lanka and the Ramayana’s main antagonist who kidnapped Rama’s consort Sita. As gatekeeper, Nandi refused Ravana’s request to meet with Shiva. Ravana taunted and teased Nandi in an attempt to get his way, but this only irritated the bull, causing him to curse the demon king, foretelling that Lanka would be burned to the ground by a monkey. This later came to fruition when Hanuman rescued Sita and destroyed Ravana’s kingdom.

Nandi’s importance in Shiva’s world originates from early Indian culture, where dairy farming was the most significant occupation, giving the cow great status. Vahanas represent the overriding and neutralizing power of gods over creation and ability to control and transform energies within the universe. Each vahana is specific to their deity: Garuda serves Vishnu as the sun god, Ekahamsa (One Swan) serves Brahma as the creator god who initiated creation through water, and Nandi serves Shiva as a symbol of fertility. Since Shiva was worshipped with great fervor in South India where the majority of his temples exist, it is clear why most Nandi sculptures originate from the south. While there are figures of Nandi that hail from the North, they are less common, giving the present figure an added level of dynamism. 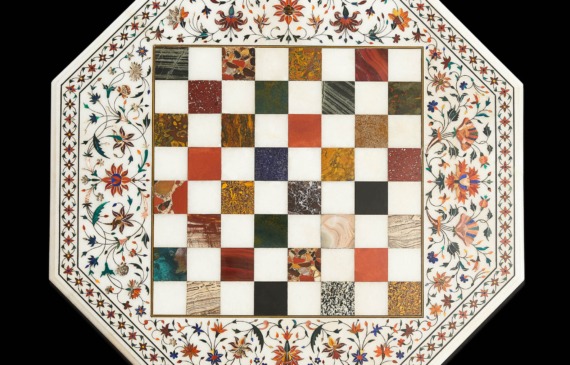 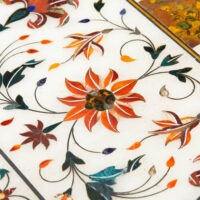 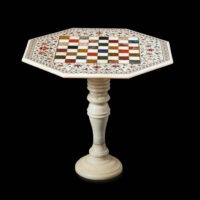 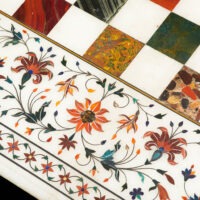 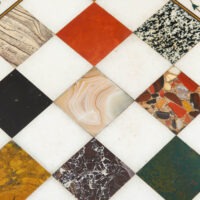 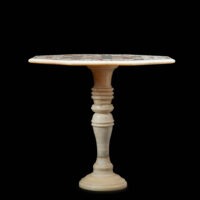 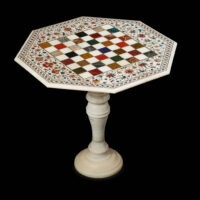 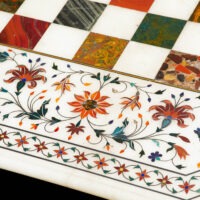 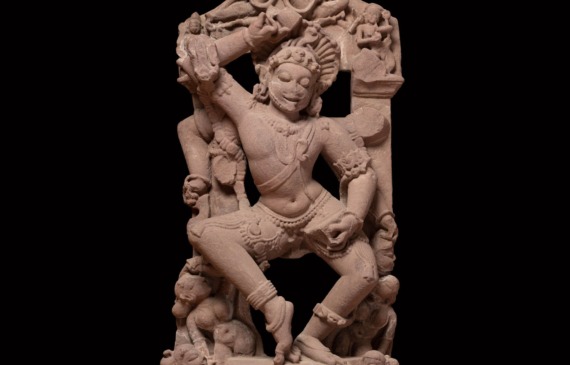 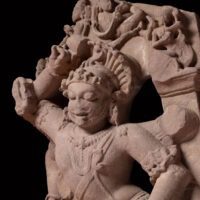 Provenance:
With Kapoor Galleries by the 1990s.

Ardoksho, a female deity of the Kushan Empire, is depicted seated, wearing long flowing robes, and holding a lotus flower in her right hand. She is identified by the cornucopia in her left hand, a symbol of abundance and fertility influenced by the Greek goddess of Fortune, Tyche, who was often depicted with one herself. Ardoksho is often regarded to be analogous with the deity Hariti, who became popular throughout east Asia due to the interaction between Buddhist and classical artistic conventions in the Gandhara civilization, a large Indo-Greek kingdom in modern-day Afghanistan and Pakistan. Gandharan art is well known for its stone sculptures made with kanjur or schist covered in paint or plaster, the remnants of which can be seen on this piece.

This dwarfish figure, in a short dhoti, richly clad in heavy jewelry, a sacred thread or yajnopavita, and a tall crown, is a yaksha. Yaksha are semi-divine nature spirits with a variety of manifestations in the Hindu context, adopted and transformed by Mahayana and Tantric Buddhists. In the context of Tantric Buddhism, from which the present example emerges, yaksha are often benevolent attendants of buddhas and bodhisattvas. The present yaksha stands on a lotus pedestal, holding a fruit or bud in his right hand and a lotus in the left. Vidyadharas or ‘knowledge-bearers’ preside over him in the clouds above, while attendants (also bearing lotuses) stand at his sides.

While exact identification of this figure is not possible, the origin of the sculpture is apparent. Gray schist steles of this size and compositional style were typical products of the Pala Empire in Northeastern India. The ties for the yaksha’s diadem which billow out from rosettes behind each ear are a stylistic trope that seems to have begun with Pala sculpture. His cone-shaped crown adorned with triangular petals and a rounded finial point to its tenth or eleventh century date of creation. 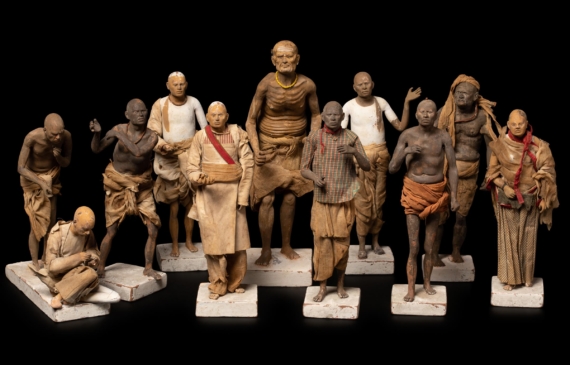 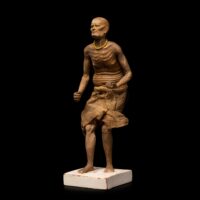 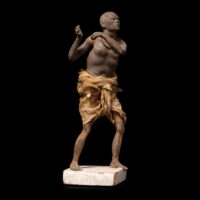 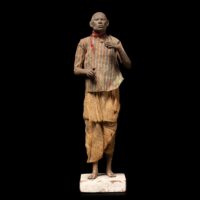 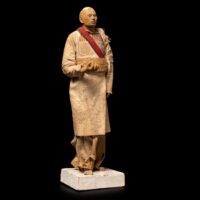 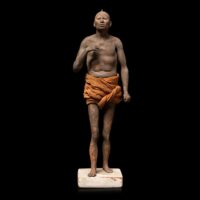 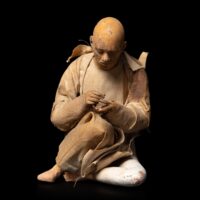 Krishnanagar, a province of Bengal, has a long history of clay modeling which began in the mid-18th century when Maharaja Krishnachandra Roy (r. 1728–1783) established potteries in the region in order to create religious idols (Chose, 44–45). While clay figurines were traditionally limited to figures of deities from the Hindu pantheon, the Maharaja’s introduction of the Hindu practice of Barwari Puja (community worship) created a large and diverse clientele for clay modeling. Clay scenes made for group worship began including figures of human attendants that served the clay gods. These human figures soon became popular on their own, encouraged by the Western demand for realistic representations of the people, plants, and animals of India (Chatterjee, 208).

The practice reached its zenith in the late 19th century, when such figurines were considered national treasures and were often sent to international exhibitions to represent India. In particular, the Pal family garnered much renown for their exceptional skill in the craft, the most famous of whom was Jadunath Pal (1821–1920). An article written for the Glasgow International Exhibition in 1888 recounts that:

The figures made by [the Pal family] have acquired great celebrity, and they have repeatedly gained medals and certificates in most of the International Exhibitions held since 1851. There is considerable delicacy and fineness in their work; the figures are instinct [sic] with life and expression, and their pose and action are excellent. (Mukharji, 59)

The writer continues that Jadunath Pal in particular had “no equal in India in this kind of work” (Mukharji, 63).

The present set, representing a variety of Indian castes, is attributed to Jadunath Pal, who often included the contributions of specialist tradesmen in his work–the clothing was made not by modelers, but by actual tailors, and if a figure was accessorized with a basket or a necklace, they often came directly from the professionals themselves, giving the figures an exceptional realism. While many of the figures are missing the implements of their trade that would once have distinguished them from one another, the delicate positioning of their bodies and their animated appearance nevertheless bring them to life. Not only were these figures once outfitted with real clothing and tools, but also with human hair. While this novel feature is now missing on a majority of the figures, the largest of the group—an elderly man with a wonderfully articulated stomach and a string of beads around his neck—still retains his original patch of hair.