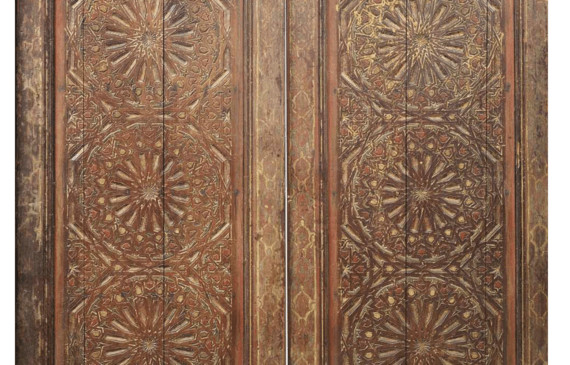 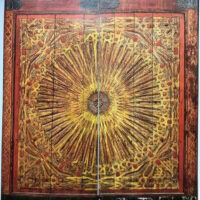 Comprising two very thick rectangular panels with extended tenon hinges at top and bottom, the face of the two carved together to give a very strong radiating circle of strapwork issuing from a central sun motif, the spandrels with strapwork geometric interlace, the interstices painted with arabesques and floral motifs, in plain red border, the hinge edge with a painted band of interlaced strapwork panels, the reverse of each with a central panel of three strapwork interlace roundels within plain and painted borders, metal kick plate below on each side, metal hinge bindings, with modern mahogany heavy freestanding frame. 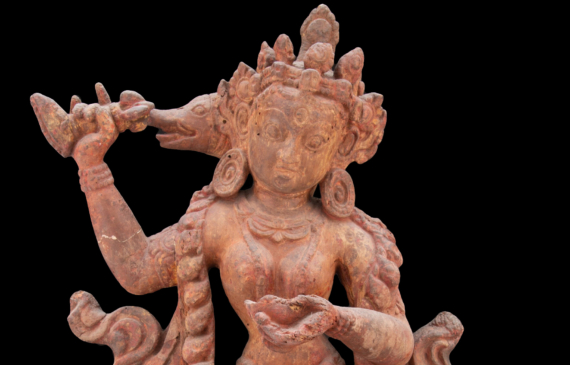 The present sculpture depicts Vajravarahi, a prominent female deity in tantric Buddhism and consort of Chakrasamvara. Although she is usually shown accompanying or embracing him as his other half, Vajravarahi alone is often considered to be a godly representation of the combined wisdom held by all buddhas. One of Vajravarahi’s eminent identifying features is the sow head, or varahi, emerging from behind her proper right ear. Tibetan Buddhists have symbolically used the sow to represent ignorance within their practices and the attached head implies the defeat of the beast, reinforcing Vajravarahi’s overarching wisdom and general triumph over ignorance.

Another one of Vajravarahi’s identifying features is her distinct pose, which appears as though she is frozen in movement, with her proper right leg bent towards her proper left thigh–a position that is referred to as ardhaparyanka. Beneath her lies a corpse, a Buddhist representation of the ultimate evil that has been conquered by Vajravarahi’s immense power. In addition to her decorated body and billowing drapery, Vajravarahi proudly wears an intricate headpiece with the heads of five humans. She also wears a large garland of severed heads that hangs around her dancing figure. In her raised proper right hand she holds a knife that is thought to be used to cut out irrelevant worldly concepts and leave only an acute awareness or jnana. Her proper left hand holds a small cup, usually a skull, that is said to be filled with blood or the scrambled ideas of humans. The present sculpture’s intense and violent imagery further emphasizes Vajravarahi’s vigor and power as she symbolically defeats ignorance, the fear of death, and other earthly or mundane views.

For another depiction of Vajravarahi, see Himalayan Art Resources, item no. 34057. This Vajrayogini (Vajravarahi’s form without the sow head) also displays the deity’s standard iconography and pose as well as similar billowing drapery.