Bhairava, a fierce manifestation of Shiva, is one of the most important deities in Nepal. During the Indrajatra festival of Nepal, devotees drink beer or wine funneled through the gaping mouths of Bhairava masks. Here he is depicted in a standard fashion, with fangs and bulging eyes atop a supine figure, with his right leg pinning down its head and his left, its legs. His physical figure is youthful, well proportioned, and rotund. His principal hands hold a skull cup while his additional four arms radiate around his body, holding a trident staff and the head of Brahma. The present figure closely resembles the large, heavily-worshipped image of Kala Bhairava in Kathmandu’s Durbar Square.

Kala Jambhala, or Black Jambhala, originated in India and was widely popularized in Nepal and Tibet. Standing with his right leg bent at the knee atop a supine figure and with his left leg thrust to the side, he holds a skullcup in his proper-right hand and a mongoose in his left, symbolizing his power to destroy human greed and bestow good fortune. He is similarly adorned in serpents to symbolize his conquering of avarice. The present sculpture is made of a copper-rich alloy apparent in its reddish tone, pointing to its Nepalese origin; this is corroborated by wide, yet soft facial features common to the late Malla sculptural styles. 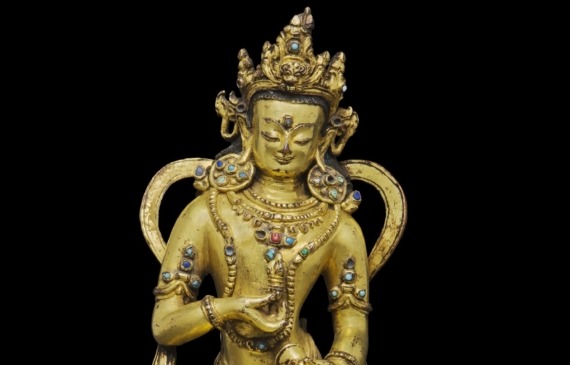 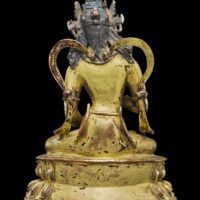 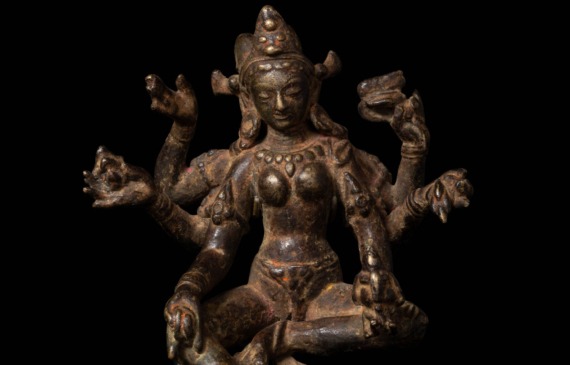 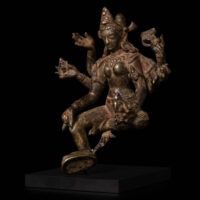 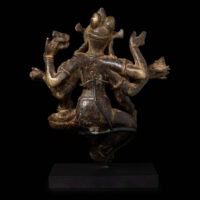 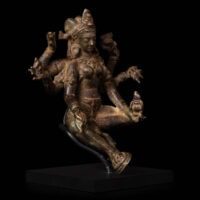 Provenance:
With Kapoor Galleries, by the 1990s. 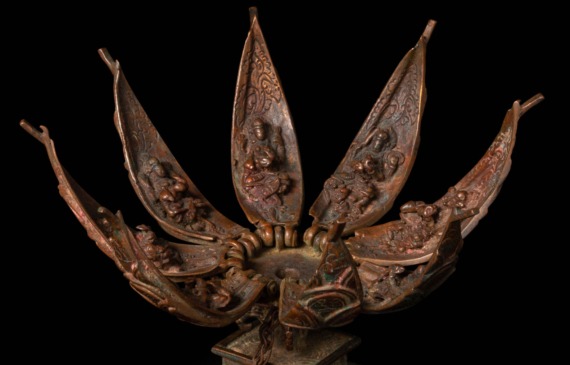 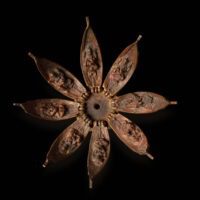 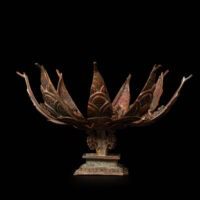 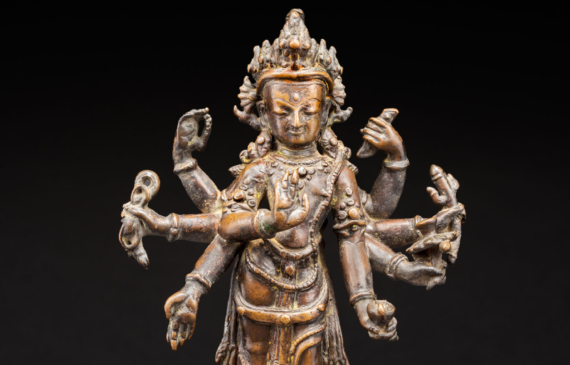 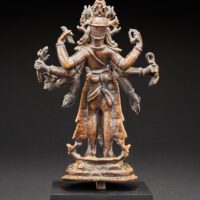 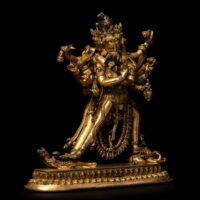 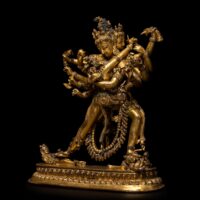 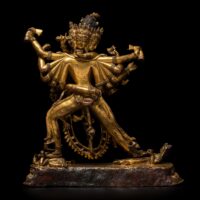 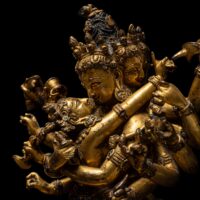 Provenance:
Henri and Dolores Kamer, New York.
Private American collection, acquired from the above in the early 1990s.

Chakrasamvara and Vajrayogini are important deities of the highest class of yogic practice in Vajrayana Buddhism. This small gilt-bronze sculpture of meditational deities in union exudes an energy that reaches far beyond the boundaries of its surface. Chakrasamvara is depicted here according to Tibetan Buddhist convention, with four faces and twelve hands, in alidhasana, embraced by his consort Vajrayogini. Together they trample the deities Bhairava (who lies prostrate) and Kalaratri (who lies supine). The multi-headed tutelary deity holds various attributes with his many arms radiating around him, the principle arms holding a vajra and bell and the uppermost holding the ends of a tiger skin which he drapes over his back.

This lustrous gilt-bronze sculpture is representative of the highest quality Nepalese craftsmanship. Its magnificence is embedded not only in the semi-precious inset ornaments that adorn the deities gleaming golden, perfectly proportioned bodies, but perhaps more so in the sweetness of the countenances and the apparent meeting of the male and female manifestation’s gazes–the intangible, yet most-human feature of this sculpture.

Compare the present sculpture to a fourteenth-century sculpture of Chakrasamvara in union with Vajrayogini from Central Tibet at the Rubin Museum of Art (acc. C2005.16.16) which has repeatedly been attributed to the hand of a Nepalese artist in exhibitions and publications (see Collection Highlights: The Rubin Museum of Art, New York, 2014, p. 106). The Rubin sculpture appears to have been crafted in Tibet for a number of reasons including the appearance of the metal alloy beneath the gilding and the fixtures revealed on the backside of the figure and base which indicate that it would have been mounted on a larger structure, likely a tashi gomang or a stupa of ‘many auspicious doors.’ The similarities between the present sculpture and the Rubin example, in terms of craftsmanship and style are significant as the Rubin sculpture more directly evidences the significant relationship between Nepalese craftsmanship and Tibetan Buddhist worship.

Newar craftsmen made Vajrayana buddhist figures such as the present for both Nepalese and Tibetan patrons in both Nepal and Tibet. However, the unfinished backside of the present figure’s lotus base and the remnants of red pigment thereon are telltale signs of a geographical Nepalese provenance. The modeling of the lotus petals and red pigment applied to the back of the base can be observed on a stylistically similar sculpture of Sahaja Chakrasamvara at the British Museum (acc. 1921,0219.1) attributed to the sixteenth century and acquired directly from Nepal.