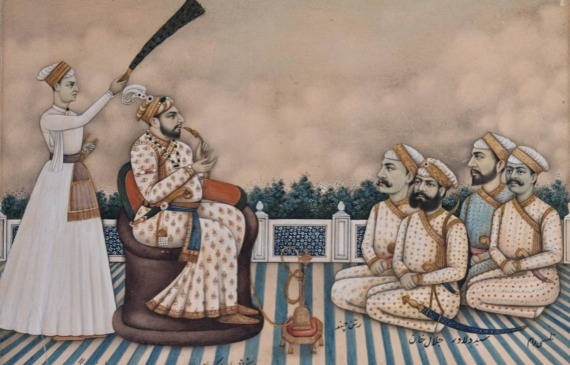 Sayyid Hasan Ali is seated on a rounded European-style cushion chair, holding in each hand the stem of a hookah and a sheathed ceremonial sword.  He wears a long white jama and a Mughal-style cap lavishly ornamented with gold pearls and precious gems with a feather-topped sarpech at its peak.  He sits perfectly upright listening to a minister read a petition from a long scroll while an unidentified attendant slowly waves a peacock-feather morchal above his head.

The name ‘Sayyid Hasan Ali,’ as well as the other figures in the painting, are known from the identifying inscriptions above and below each participant.  An inscription under the main figure reads: Zamin-Ul-Dula Qutb-Ul-Mulk Sayyid Hasan Ali Khan Al-Maruf Abdulah Khan Zafar-Jang Bahadur. Additional inscriptions above the other figures identify them as follows: the principal petitioner standing is Sayyid Abdul Jalil Wasti Belgrami and the kneeling figures, right to left are: Sayyid Saif-ul-Din Khan, Sayyid Gairat Khan and Sayyid Alam Ali Khan.

The Mughal Emperor Farrukhsiyar (r. 1713-1719) conferred the title of  ‘Abdullah Khan Qutb-ul-Mulk’ on Hasan Ali and ‘Amir-ul-Umra Firoz Jang’ on Hussain Ali in gratitude for their political support. These brothers are regarded as “king makers” in Indian history.  They were instrumental in facilitating Farrukhsiyar’s ascension to power and acted as  a continuing force behind his hold on the throne. They were subsequently key players in the Emperor’s demise.

The compositions of the durbars, each participants’ rounded naturalistic face (some in three-quarter view), the diagonalized receding lines of the dhurrie carpet and complex spray of blossoming foliage behind, are all evidence of great European influence, indicating the Company School origin of this painting, which was likely executed near Patna in Bihar. The Company Style developed throughout the eighteenth and nineteenth centuries in response to the dominating power of the British East India Company, giving the painting school its name. These works were created by native artists who reinvented their Indian artworks for British patrons. 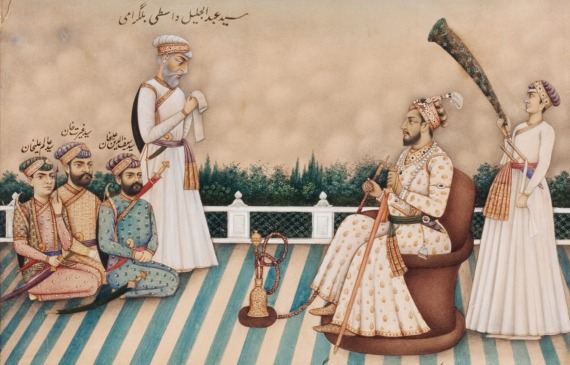 Bare-chested and wearing a topi—a prayer cap often worn by members of the Muslim faith—a scabbard maker is depicted against a stark background. Appearing in deep concentration, his eyes squint over a pince-nez that rests low on his nose. Surrounded by tools of his trade, he holds a large file in his right hand as he prepares to work on the talwar that rests on his knee. A large box with a tassel closure lies behind him near a stone block used to shape his blades.

This painting comes from a series depicting figures of various castes and professions–a common theme within the Company School, which catered to the growing European fascination with Indian customs and culture. The present figure was likely drawn by an artist from the circle of Ghulam ‘Ali Khan of Delhi, which consisted of some of the most accomplished and versatile artists of the Company School.

Compare to another folio attributed to the circle of Ghulam ‘Ali Khan from the famed Fraser Album, commissioned by William Fraser (1784–1835) and his brother James Baillie Fraser (1783–1856) in 1815–1819 (Art Institute of Chicago, acc. 1981-248). Both images are set against an off-white backdrop that brings focus to the figures and their activities, and share a subtle naturalism and a soft stippling of form. The present painting, however, has been re-pasted into a different album, which includes illustrations of various qualities from a variety of schools, ranging from the Pahari Hills to the Delhi-Agra region. Each folio includes an inscription in Takri below. See a collection of four folios from the same set sold at Christie’s, 25 October 2016, lot 15. 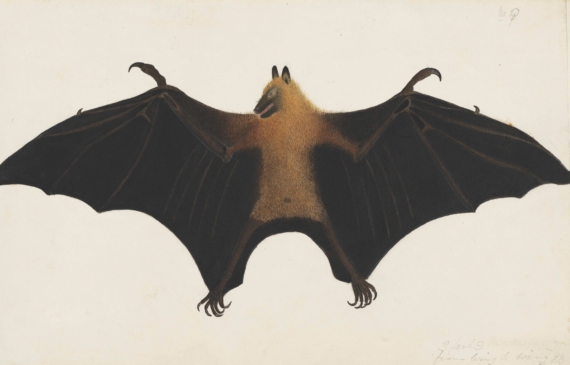 The Company School of Indian painting came into being as the officers of the British East India Company and their families expanded control in India and became patrons of the arts. As a result, the 18th and 19th centuries saw Indian artists (many of which were trained in the Mughal tradition) adapt their style to suit European palettes, particularly in their interest in science and discovery. This led to the production of stunning images of local flora and fauna which were often compiled into albums by their patrons and taken back to Europe. Within the so-called Company School, there developed two famed artistic circles–the circle of Bhawani Das and the circle of Ghulam ‘Ali Khan—which produced the Impey Album and the Fraser album, respectively. These two albums are largely considered to be the finest examples of Company School paintings ever produced.

Here, the artist has chosen the great Indian fruit bat (Pteropus giganteus) as his subject in this fine and dramatic study. The animal is rendered naturalistically, the artist paying exceptional attention to detail, most notably in the soft fur, almost-human eyes, and curling claws. In regards to another Company School drawing of the same subject, Stuart Cary Welch points out that “[it] looks far too disturbing to be a strict fruitarian. Its eerie extra claws, useful for holding bananas or mangoes, evoke Gothic horror tales.” Such an evocative subject, which was drawn from life, surely sparked the fascination of this painting’s European patron, who likely wrote the English inscription in the lower right corner, signed JB, recording the subject’s impressive size, “3 feet 9 inches from wing to wing.”

There are three other known Company School illustrations of fruit bats, all of which are attributed to Bhawani Das, who produced extensive natural history studies for Sir Elijah Impey, Chief Justice of Bengal (1774–1782), and his wife, Lady Mary (see William Dalrymple, Forgotten Masters, Indian Painting for the East India Company, London, 2020, p.69–71, figs. 32–34). While the present image is executed on European Whatman paper, as were many other known Impey Album pages with similar illustrations, it is drawn on a much smaller scale, and more closely resembles illustrations produced by the circle of Ghulam ‘Ali Khan. See a folio from the Fraser Album at the British Museum depicting eight Sikh courtiers and servants of the Raja Patiala (acc. 1988,1020,0.1). While quite different in subject, the two images share the softly stippled layering of colors, rounded forms, and subtle naturalism that characterized paintings produced by the circle of Ghulam ‘Ali Khan. While the present image is almost certainly not from the Fraser Album, which consisted majorly of figure drawings and costume studies, it was likely produced by the same group of artists for another patron. 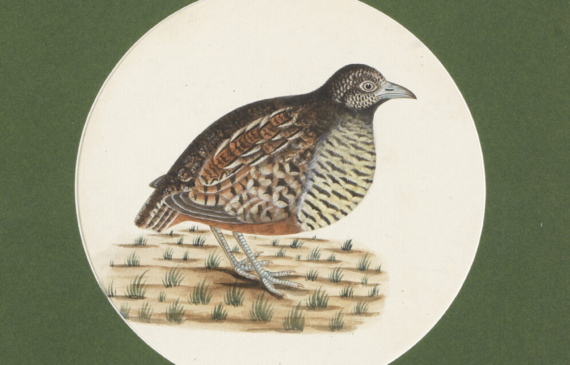 In 1775, Nawab Asaf ud-Daula of Oudh moved the capital of the northern state from Faizabad back to Lucknow. Thereafter, the city experienced rapid growth and thriving industry; with its elegant  gardens, sculptures, and fountains as well as exquisite new palaces and mosques, Lucknow flourished well into the 19th century and provided the perfect environment for Company School painting to prosper.

A number of British artists visited the burgeoning city at the end of the 18th century, including Thomas and William Daniell, Ozias Humphry, and Johann Zoffany. There were also several European officials posted in Lucknow who were avid patrons of Indian artists. Thus, Indian artists were exposed first-hand to examples of British and European art from which they drew inspiration, ultimately leading to a plethora of paintings produced in the Company School style.

These three studies of quail provide very fine examples of the close examination and naturalistic rendering that Company School artists were known for. Each bird displays an exceptional attention to detail, down to the precision of each feather’s barbs and the scaly texture of their feet. The rich brown, warm orange, and pale yellow hues in contrast to the white speckled details of the feathers provide a precise and wonderful testament to the natural beauty of Indian wildlife, one of the main focuses of Company School painting. Compare the present works to a Company School painting of a hooded merganser from circa 1800 at the National Gallery of Victoria (acc. 2011.25). Note the similarities in the meticulous rendering of each individual feather as well as the treatment of the landscape in all four paintings—tufts of grass spurting from shadowed patches—which is typical of late-18th-century Lucknow painting. 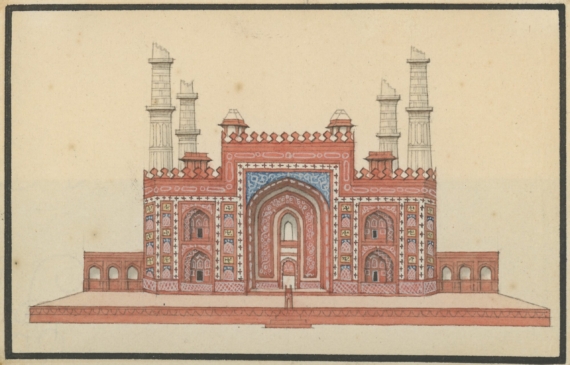 Tomb of Akbar the Great
Company School
circa 1800

As Europeans continued to colonize India, they remained dazzled by the grandeur of the historical architecture throughout the country. As a result, the Company School produced countless architectural studies of the extravagant palaces and tombs of rulers past. Captain G.C. Mundy, who served as a lieutenant in the British army in the 19th century, gives a first-hand account of these splendors:

We have here domes, minarets, fanciful architecture and a costume above all flaunting in color, set off with weapons and formed, from the easy flow of its drapery, to adorn beauty and disguise deformity… Every hut, equipage, utensil and beast of India is picturesque.

Here, the illustration captures the picturesque beauty of the tomb of Akbar the Great near Agra. While the monument is still standing today, Company  School architectural illustrations provide important records of buildings that have been destroyed, such as parts of the Delhi Palace complex. For another Company School watercolor of Akbar’s tomb from the same vantage point, see the British Museum (acc. 1945,1013,0.9.28). 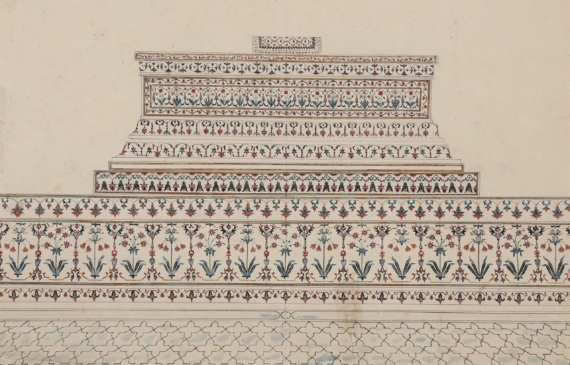 Son of Jahangir and grandson of Akbar the Great, emperor Shah Jahan (1592–1666) was responsible for shepherding in the golden age of the Mughal Empire. Under him, arts and literature flourished and a stunning architectural style was established, culminating in the erection of the legendary Taj Mahal. Located in Agra, the seat of Mughal rule, the Taj was intended to serve as a tomb for Shah Jahan’s deceased wife. He himself was buried with her upon his death.

The first folio, identifiable by the ‘T’ marked at the bottom left of the page, depicts Shah Jahan’s tomb in the Taj Mahal complex, which appears decorated with traditional Islamic floral and geometric motifs. The second folio depicts the tomb of Mumtaz Mahal at the Taj Mahal complex. While her tomb is also carefully adorned with floral motifs, it can be differentiated from Shah Jahan’s by the Quranic inscription near the top. The inscription was created using pietra dura—a decorative mosaic technique that involves cutting and fitting stones to create detailed designs—and reads the ninety names of God, including “O’ Noble, O’ Magnificent, O’ Eternal.”

These drawings served as a form of architectural documentation for European audiences. The correspondence between the British and Indian artists helped to advocate for the preservation and maintenance of Mughal monuments and simultaneously introduced the West to the architectural marvels of India. For another set of similar Company School architectural drawings depicting Mumtaz’s tomb and the interior of the Taj Mahal, see the collection of the Victoria & Albert Museum (acc. IS.252-1961).