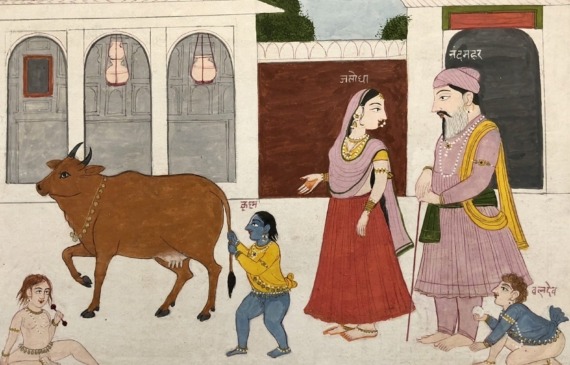 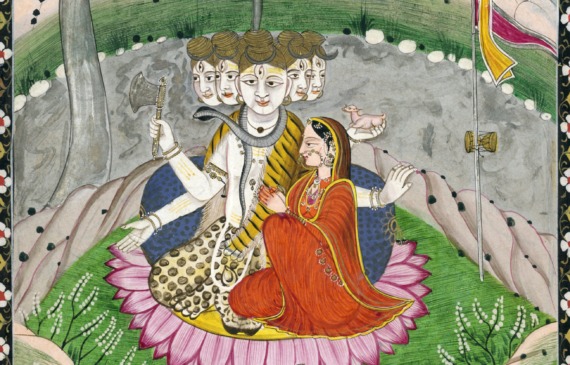 Shiva Panchanana and Parvati
Pahari
Second half of the 19th century

Shiva Panchanana (the five-headed manifestation of Shiva) seated on a lotus cushion accompanied by the Goddess Parvati – amid the hillsides of Mount Kailasa. In his hands are the attributes of an ax (parashu) and a deer. His trident and drum stand nearby. The River Ganges springs from his hair as a serpent entwines his neck. Nandi the Bull waits patiently below. 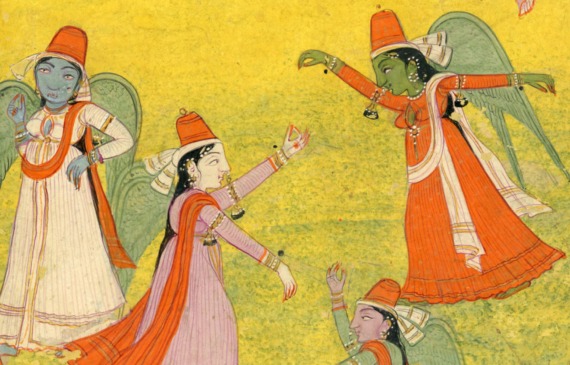 Angels Dance and Fly
Pahari
Circa 1800 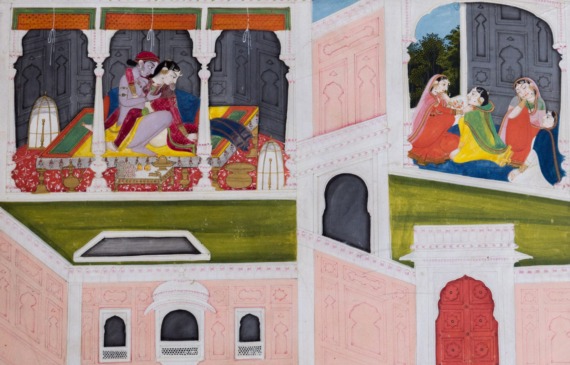 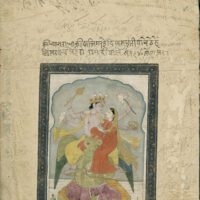 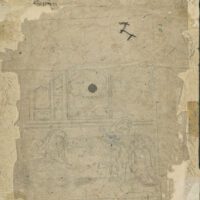 Provenance:
The collection of Dr. and Mrs. Giraud V. and Carolyn Foster, acquired in India, 1956.

The present painting depicts Vishnu and Lakshmi seated astride his vahana, Garuda. The blue-skinned Vishnu holds one of his four attributes in each hand: a mace, a conch shell, a lotus flower, and a chakra. Lakshmi looks up at him in devotion, pulling him towards her with one hand on his shoulder—a subtle and romantic touch that Pahari artists were well-known for. Garuda supports the couple, grasping their feet and holding them steady. The assured hand and dreamlike lyricism give this image an exceptional ability to convey human emotions. The folio, which has been pasted onto a new backing, is inscribed in a different hand in the year Samvat 1840 (1783 A.D.), attributing the work to Ram Dyal.

See a painting of the same subject attributed to Sajnu, circa 1810–1820, currently at the Metropolitan Museum of Art (acc. 2019.144). The Met’s description of the scene can similarly be applied to the present painting:

It is a rare work in the genre of Pahari (Hill) schools in that it concerns itself not with narrating a scene from the epics or devotional literature, but celebrates a single deity, Vishnu, riding his magnificent avian vehicle Garuda. In this way, it singles itself out as a work not concerned with storytelling but rather with celebrating the beauty and grace of Lord Vishnu. As such, it can best be understood as a very personal work, destined for private worship in a household shrine-room.

The drawing on the verso of this painting has been identified as Radha and Krishna’s Reconciliation, and can be compared to another composition of the same scene from Kangra, circa 1790–1800, formerly in the Coomaraswamy Collection, now in the Cleveland Museum of Art (see Linda York Leach, Indian Miniature Paintings and Drawings, The Cleveland Museum of Art Catalogue of Oriental Art, Part One, Cleveland, 1986, no. 122). The drawing provides a fascinating look into the process of the famed Pahari ateliers. The crisp lines, drawn by skilled hands, are by no means the work of a ‘rough draft’—despite being uncolored, the image is not in fact unfinished. Functioning as an ‘artist drawing’ that would be kept in the studio as a reference, inscriptions throughout contain coloring instructions. The red inscription on the top right specifies that the background be painted red, while the inscription in the center of the window directs the artist to “paint the color of moonlight, showing the moon in the sky.” These directives helped to maintain consistency throughout the atelier’s works, which were usually executed by a number of different hands. 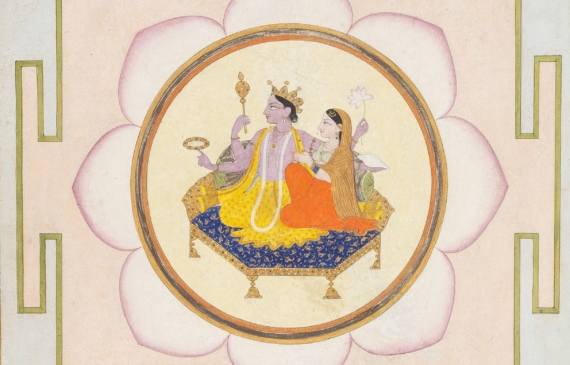 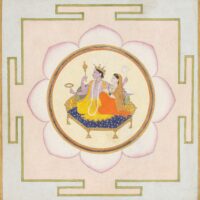 Vishnu the Preserver appears here in his Chaturbhuja (four-armed) form, enthroned beside his consort Lakshmi. The god’s identity is revealed by his blue-toned skin and vibrant yellow dhoti as well as the objects he carries in each of his four hands: a discus (chakra), mace (gada), conch (shankha), and lotus. Both deities are illustrated in an opulent manner–garbed in vibrant colors and lavish pearl, emerald, and gold accessories–which follows the typical convention for depicting Vishnu as a king and Lakshmi as the goddess of wealth and prosperity.

Perhaps most notable, however, is the placement of the divine couple within a yantra—a rare practice in Indian miniature painting. Yantras are tantric diagrams used in homes and temples to aid in meditation and can be of several types. The present painting displays a pujayantra, which is invoked in the worship of specific deities. Vishnu and Lakshmi are encircled within a border surrounded by eight lotus petals pointing in the cardinal and intermediate directions. Yantras often include lotus petals—a symbol of purity, transcendence, and fertility—in various numbers, but with eight being one of the most common. The lotus is then enclosed in a square with four gates–sacred doorways also pointing in the four cardinal directions—a standard convention in the representation of yantras.The painting’s verso is inscribed with a nagari couplet, the first line of which states that it is said that whoever chants Raghubir’s name (an incarnation of Vishnu also known as Lord Ram) shall be absolved of their sins, remain happy, and not fear death. The second line expresses that Lakshmi-Narayana (Vishnu with Lakshmi) resides in the heart.