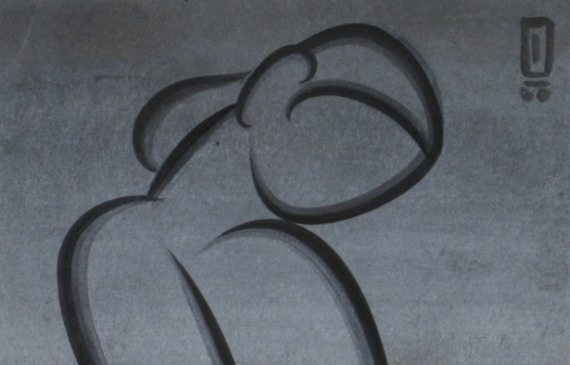 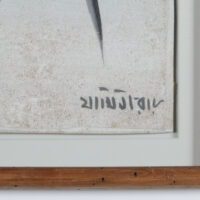 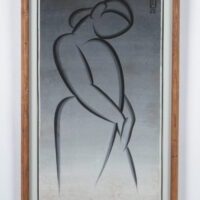 Provenance:
From an important New York Collection.
Acquired from a private Pennsylvania Estate.

Jamini Roy was one of the earliest and most significant modernists of Indian art. Trained in the British academic style of painting, Jamini Roy became well known as a skillful portraitist. He received regular commissions after he graduated from the Government Art School Kolkata in 1916. However, influenced by the growing surge of nationalism, Jamini Roy consciously rejected the Eurocentric style and searched for forms that stirred the innermost recesses of his being. He sought inspiration from East Asian calligraphy, terracotta temple friezes, folk arts and crafts traditions. From 1920 onwards, Roy’s works represented village scenes that reflected the innocence and romanticism of rural environments. The artist also completed a suite of paintings featuring Santal women, sensuously painted in firm angular lines and hinted stylisation, engaged in their daily chores. From the mid-1920’s, his images were executed in sweeping, calligraphic lines showing the artist’s strong control over the brush. Color was leached out of the paintings, resulting in series of monochromatic pictures that hinted at inspiration from East Asian painting styles, Kalighat pats. His images for the most part became monochromatic – an austere play of white, soft grey and black. With a masterly control of the brush, he created contours with fluid, calligraphic lines. During this phase, Roy painted stark, graphic versions of images from everyday life, including seated women, mother and child figures, bauls, leaping deer, and crawling infants. By the end of the 1920’s, he turned for inspiration towards the folk arts and craft traditions of his district, Bankura. He painted ordinary rural people, scenes from Krishna-leela, scenes from epics, icons from folk cults of the region, along with witty representations of animals. It is interesting that until the 1930’s, along with his folk-style paintings, Roy continued to paint portraits with impressionist and even pointillist brushstrokes.