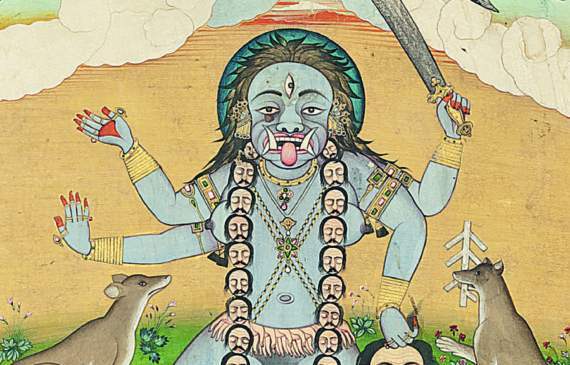 The Goddess Kali
Attributed to Sajnu
Mandi
Circa 1810

The goddess depicted in a classical stance after her killing spree, the third eye surmounts her tongue struck out in between protruding fangs, clad in a belt of decapitated hands and a necklace of severed heads as jagged hair runs down her shoulders. The manifestation of destruction and barrenness is seen brandishing a curved sword (kharga), holding a decapitated head, with a foot over Shiva’s body. Jackals and vultures surround the scene smelling death in the blood-saturated air. The illustration is centered in an octagonal medallion, the spandrels embellished with gold scrolling foliate tendrils, in black borders with scrollwork, wide pink margins containing further depictions of her emanations, cusped cartouches above and below with a vulture and a rat.
The distinctive elaborate margins of this work with cusped cartouches containing attendants of Kali and associated animals are similar to those found on a painting of Raja Isvari Sen of Mandi worshipping Shiva attributed to artist Sajnu, (W.G. Archer, Indian Paintings from the Punjab Hills, London, 1973, fig. 46, p. 275). 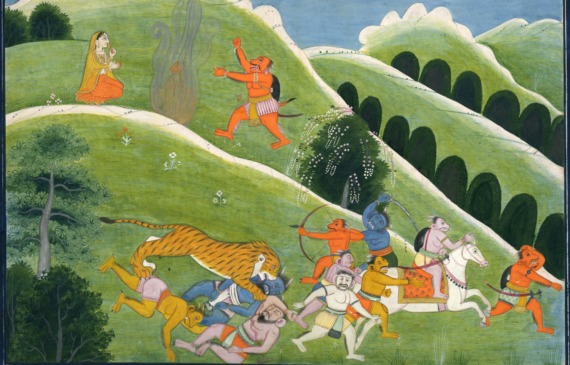 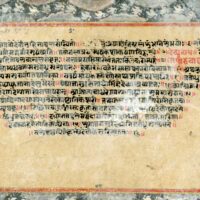 An Illustration to the Devi Mahatmya: Ambika Reduces the Demon Dhumralochana to Ashes
Mandi
Circa 1825

Drawn from the part of the Markandeya Purana called the Devi Mahatmya, this painting depicts the victory of Ambika over Dhumralochana and his army, who were sent by the asura Shumbha. The gods became weary of two demons named Shumbha and Nishumbha, who had undergone great penance to receive a boon that prevents any male, human or not, from killing them. The gods resultantly prayed to the Goddess (Devi) to rid them of these evil creatures, and she came forth from Parvati as Ambika, a form of Devi. Upon learning of this beautiful lady, Shumbha sent Sugriva as a messenger to her with a proposition of marriage.

She replied by telling Sugriva to relay this message to his master Shumbha:  “He who conquers me in battle, removes my pride and is my match in strength shall be my husband. So let Shumbha come here then, or Nishumbha the great asura. Vanquishing me here, let him soon take my hand in marriage. Why delay?”

Sugriva retorted: “O Devi, you are haughty. Talk not so before me. Which man in the three worlds will stand before Shumbha and Nishumbha? All the Devas verily cannot stand face to face with even the other asuras in battle. Why mention you, o Devi, a single woman? Indra and all the other Devas could not stand in battle against Shumbha and other demons, how will you, a woman, face them? On my word itself, you go to Shumbha and Nishumbha. Let it not be that you go to them with your dignity lost by being dragged by your hair.”

Devi said: “Shumbha is strong and so is Nishumbha exceedingly heroic! What can I do since there stands my ill-considered vow taken long ago? Go back, and tell the Lord of Asuras carefully all this that I have said; let him do whatever he considers proper.” (Chapter 5, verses 120-127).

So Sugriva relayed the message to his master Shumbha, who was outraged at being so disregarded that he sent Dhumralochana and his army to retrieve Amibka by pulling her hair. When Dhumralochana advanced on Ambika, she smote him and he became nothing but a pile of ashes. The demon’s army of 60,000 asuras was likewise vanquished by the lion of Devi, once again instituting the power of the goddess. Dhumralochana can be seen in the present image advancing up a hill towards Ambika, then consumed by flames right before he reaches her. In the bottom register, Dhumralochana’s army are destroyed by the mighty lion of Devi. 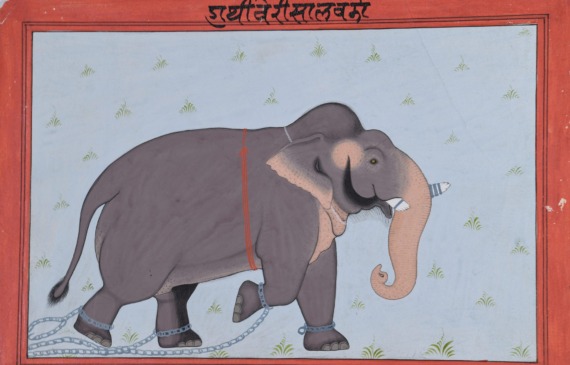 To view a comparable subject from Mewar, click here. 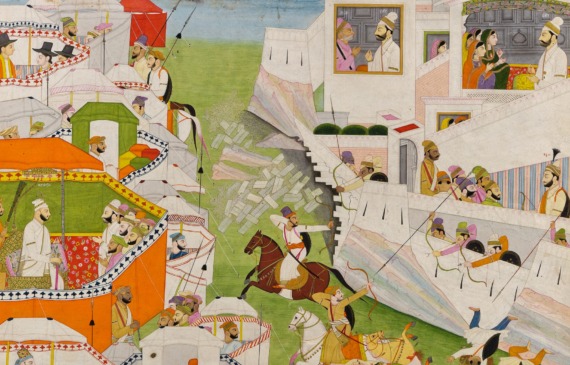 An Illustration to the Hamir Hath: Hamir consults with his advisors while his archers hold the fort
Attributed to Sajnu
Mandi
Circa 1810

The Chauhan ruler Hamir speaking to his minister Jaja and his daughter Devala while Mahi ma consults with other courtiers within the walls of the Ranthambore fort, Hamir’s archers battle with Alauddin Khilji’s horsemen, Alauddin is depicted seated in a tented encampment with his men and European soldiers in brimmed top hats above, the names of figures inscribed in white and red devanagari script. Within white rules, narrow blue inner and red outer borders, with 811 of black and red devanagari script on reverse describing the scene, the fly-leaf with folio number ’16’ in black ink and bearing the royal Mandi library stamp, mounted.

The Rajasthani ballad, Hamir Hath (‘Pride of Hamir’) composed by the bard Sarangdhar, relates the story of Raja Hamir Dev, the heroic but arrogant Chauhan ruler of Ranthambore, who battled with Alauddin Khilji, the Sultan of Delhi. This painting is closely related to a set of twenty-one illustrations to a Hamir Hath series, which were painted by Sajnu in 1810 as a present for Raja lsvari Sen of Mandi. Sajnu presented these to the Mandi ruler after having left Kangra and his former patron Sansar Chand. The tale of Hamir is strikingly similar to that of Sansar Chand, the despotic ruler of Kangra. It involves the siege of an obdurate ruler in a vast fortress surrounded by dizzy precipices, quite like the Kangra fort with a disastrous end.

Stylistic characteristics in the painting which are reminiscent of Sajnu include the zigzag geometrical composition, the ‘jigsaw-puzzle’ rocks, the floral motifs of the carpets, and the juxtaposition of the bright colours of the dresses, carpets and tent panels against the pastel colours employed for the architecture and the rocks. The composition of our painting is also strikingly similar to ‘Hamir and the dancing girl’ from the presentation series mentioned above. For comparable illustrations and further discussion on the series, see Archer 1973, Vol. I, pp. 360-362, Vol. II, fig. 42(i).(ii), pg. 273.  For another folio from this series which is sold at auction, see Christie’s New York, 23 September 2004, lot 167.

Illustration to a Baramasa Series: The Month of Pausha (Mid December to Mid January)
Attributed to Sajnu and his workshop
Mandi
Circa 1808

Shiva as Tripurantaka, The Destroyer of Tripura
Mandi
Circa 1750-1780

The narrative illustrated here is that of Shiva as the destroyer of Tripura, the three mythical demon cities in the sky. Tripura was gifted by Brahma to the evil demon Taraka’s three princely sons as reward for undertaking severe penance. These impenetrable fortresses revolved around the sky and could only be destroyed by an arrow that could merge the three cities and set them ablaze. With these boons, the three princes abused their power, wreaking havoc across the universe and taunting the gods. Unable to stand against the princes’ power, the gods begged Shiva for help.

In order to defeat the Tripura, Shiva crafted his weapons from pieces of the other gods. His chariot, made from the earth, is depicted here, upheld by wheels made from the sun and the moon. Brahma, the Creator, with four heads and four arms, is his charioteer. Shiva’s bow, made from Meru the mountain, is strung with the serpent Vasuki, who can also be seen wrapped around Shiva’s neck. Shiva’s cosmic arrow, which he used to destroy all three cities in a single shot, is made from Vishnu, the Protector, his blue face appearing on the tip of the arrow.

Tripura is not depicted as three separate cities, but instead, is personified into demon form. The scaled pattern on the demon’s skin serves to represent the earth, and can also be seen on Shiva’s mountainous bow. Scattered across the demon’s chest and legs are buildings and animals, indications of the floating cities merged into flesh. This sort of representation helps to visualize Shiva’s foe, not simply as three fortresses, but as a formidable enemy. It can also be taken to symbolize the Tripura’s metaphorical meaning as the three components of man: the physical body, the intellect, and the soul. By destroying the Tripura, Shiva is said to have merged the three essential components of man into the supreme consciousness.

The reverse of this folio contains Devanagari numerals ‘48’ and bears a stamp and inventory number from the Royal Mandi Collection.