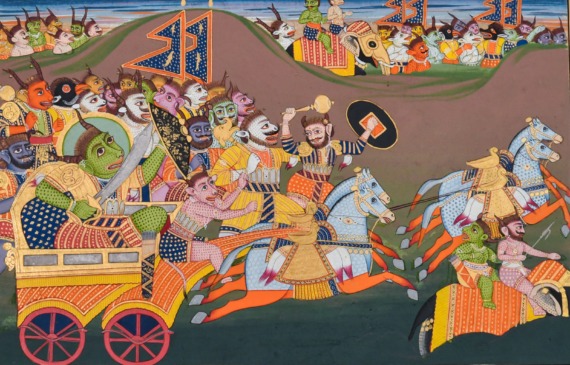 An Illustration to the Devi Mahatmya: The Demon Army
Jaipur
Circa 1820-1840

This painting depicts the demon army on its way to battle Devi. It appears that they are being led by the demon Nishumbha, as there is one clear leader surrounded by cronies, indicated by positioning and scale. Nishumbha is said to have battled Devi, first with a sword that she ultimately cut with a sharp-edged arrow that also split his shield, then with a hurled spear split in half by Devi’s discus.

This present image shows Nishumbha en route to battle, as his sword and shield are still fully intact. The bright colors incorporated into this image are highly characteristic of the Jaipur school, wherein artists were skilled in using palettes like this to highlight bold figural detail and capture an emotion-filled atmosphere in a flat style. 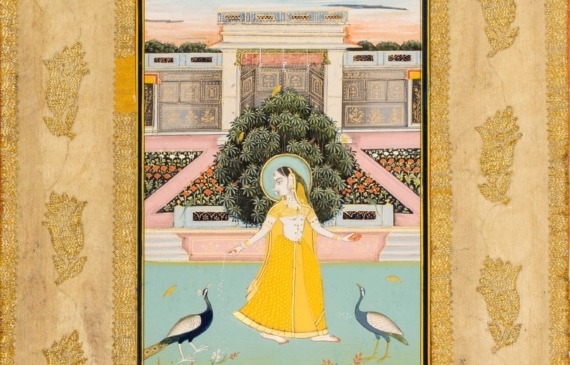 Illustration to a Ragamala:
Kakubha Ragini
Jaipur
Circa 1800

Provenance:
From a Private French Collection.

Inscribed: Five lines of Sanskrit in black ink on a bold yellow margin.

Standing before a carefully maintained garden, the beautiful maiden is shown absentmindedly feeding two peacocks within palace grounds. She looks over her right shoulder and holds a garland of white flowers in her left hand. She wears a bright yellow gaghra (skirt) that contrasts her figure to accentuate her as the main focus of the image; she is decorated with a repeat pattern of brilliant gold details and a short sleeve choli. She is bare-footed and her toes, as well as her fingers, are tipped in red, with an ombré fade below her bare feet shifting from green to a light blue that can be seen reflected in her halo. She is wearing a pearl choker and two other necklaces with jewels around her neck with two strings of longer pearls that fall between her breasts, clearly evident beneath her odhani. She has jewelled armbands set with red and green rectangular gems and pairs of black and gold tassels, brilliant bangles on her wrists and bracelets, finger and thumb rings together with anklets. She has a hair ornament on her forehead, a pair of pearls in her nostril, and round, bold earrings with pearls around the rim and on the pendant.

On the subject of the Kakubha Ragini, Dr. Pal writes “”Kakubha is a beautiful young woman, suffering lovesickness, leaving her fine palace she enters the forest, … Again and again she arouses the peacock’s scream, forgetting soul and body in a trance upon her lord.” 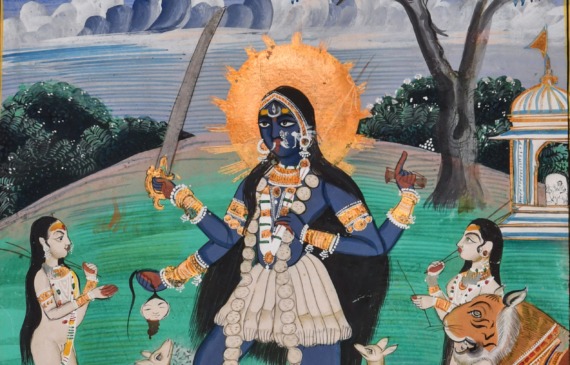 While Kali is commonly known as the goddess of death, this classification is misleading. Despite her violent tendencies, she is often associated with sexuality, and serves as a symbol of motherly love. Inextricably linked with shiva the destroyer, she is considered to be his consort and Shakti (power). Kali requires Shiva to calm her bloodthirsty inclinations, while in turn she provokes his destructive nature.

Here, Kali is shown in an archetypal scene standing over Shiva. After she had become insatiable with bloodlust, she went on a killing spree harming innocents, until the gods asked Shiva to intervene. He laid among the corpses of her victims and upon realizing that she was standing over her celestial partner, she was ashamed and returned to her original form. The imagery has a deeper meaning, however, representing the eternal triumph of nature over man; even a powerful force like Lord Shiva is obsolete without his Shakti (Kali). 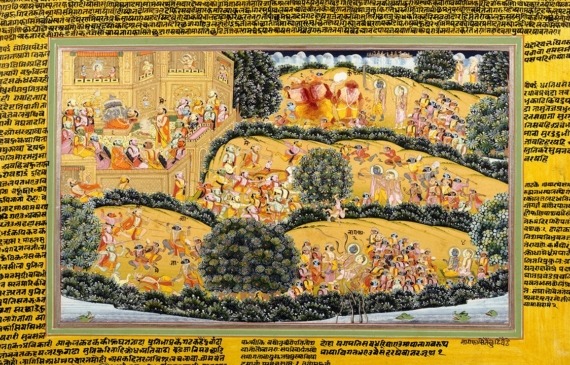 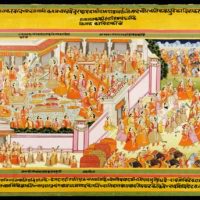 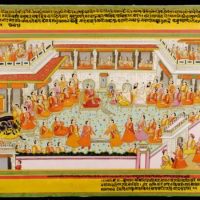 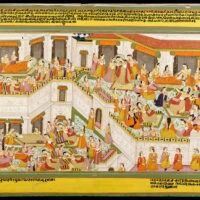 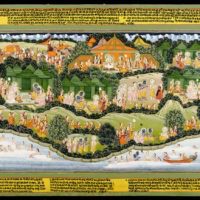 Leafs from a Ramayana Series
Jaipur
Circa 1800

The Ramayana is one of the great epics of India and considered to be an important part of the Hindu canon. By recounting the tale of Sita’s abduction, the epic deals with human values and dharma.

The continuous narrative format of this painted series depicts various events occurring on the same page, without segmentation. The most significant event shown in the featured leaf is the meeting of Rama and Lakshmana with Sugriva, the younger brother of Bali, King of the Vanara people. Rama agrees to slay Bali, allowing Sugriva to ascend the throne at which time he pledges his support to Rama & Lakshmana in rescuing Sita from Lanka. 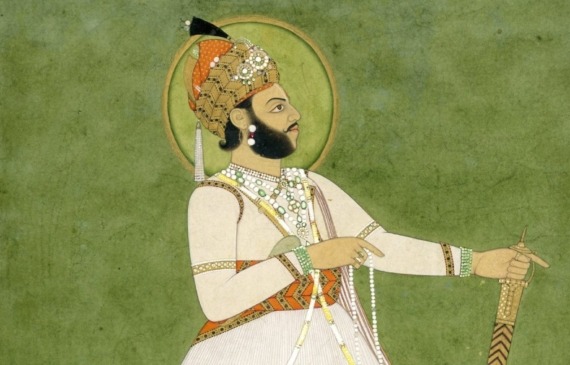 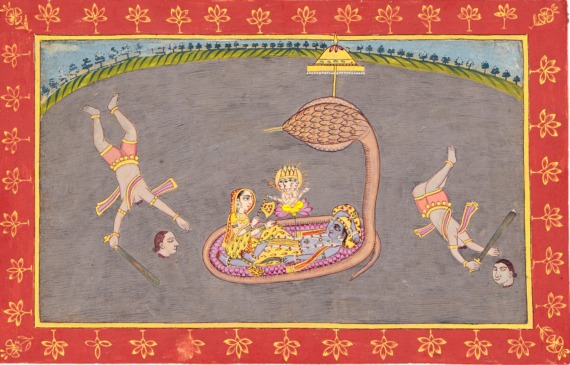 Leaf from the Bhagavata Purana: Vishnu Reclining on Shesha with his wife Lakshmi
Jaipur
19th century 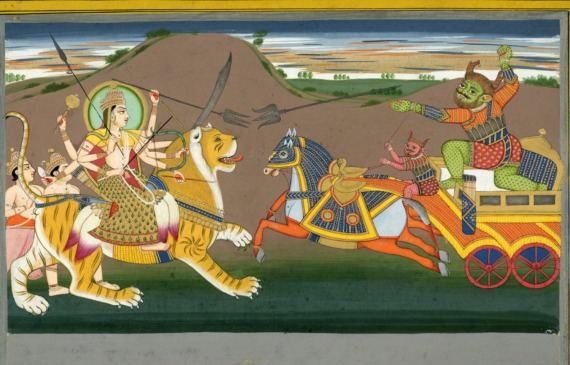 Leaf from the Devi Mahatmya: Durga in a Battle Against Nishumbha
Jaipur
Circa 1820-1840

The central narrative of the Devi Mahatmya revolves around Durga, the warrior goddess, who represents the almighty wrath of the goddess when turned against the forces of evil. Durga is a form of Devi, the goddess, just as Kali and Ambika are forms of Devi. Durga was created by Brahma, Shiva, Vishnu, and the lesser gods to slay the buffalo demon Mahishasura. The gods were fearful that Mahishasura could bring on total annihilation, so they endowed Durga with their powers. She was born full grown and gorgeous, typically depicted with eight or ten arms, each holding a weapon or attribute of one of the gods. Aside from Mahishasura, the Devi Mahatmya deals with a number of other asuras, such as the brothers Shumbha and Nishumbha, who could only be slayed by a female. This work shows Durga atop her mount, flanked by two companions, engaging in a skirmish with Nishumbha, who hurls his spear towards her. The battle with Nishumbha, Shumbha, and their army comes from chapter 9 of the Devi Mahatmya. Durga goes head to head with Nishumbha multiple times, as he will not be deterred after multiple defeats. The present work illustrates the first battle between the goddess and Nishumbha: “…the Devi quickly cut Nishumbha’s superb sword with a sharp-edged arrow and also his shield on which eight moons were figured. With his shield split and his sword broken, the Asura hurled his spear; but that missile also, as it advanced towards her, was split into two by her discuss.” Durga then proceeded to take Nishumbha down, only for him to advance and be defeated time and again until he was finally slayed by the Devi.

The bright colors incorporated into this image are highly characteristic of the Jaipur school, especially during the 19th century. Artists of this region were skilled in utilizing vibrant tones that contrast from yet complement one another, resulting in dynamic scenes that highlight figural detail and capture the emotional atmosphere. For a separate Jaipur illustration of Durga fighting Nishumbha that dates to 1825-1850, see the Los Angeles County Museum of Art painting, accession number M.77.118.

Illustration to the Devi Mahatmya: Kali Withdraws from Vishnu
Jaipur
Circa 1800

Illustration to the Devi Mahatmya: Kali Withdraws from Vishnu
Jaipur, circa 1800
Opaque watercolor heightened with gold on paper
11 x 7 in. (28 x 18 cm.)

The present scene depicts the first episode of the Devi Mahatmya. The time is pralaya, the period between the cyclical destruction and creation of the universe when the primordial ocean is all that exists. Vishnu is in deep sleep amongst the cosmic waters and Brahma is preparing to create the next universal cycle at which time two demons emerge to kill Brahma. Alarmed, he attempts to awaken Vishnu to slay the demons, singing a hymn of praise. Brahma sings to the great goddess Mahamaya, the personification of Vishnu’s sleep and asks her to release him from her spell. As Devi proceeds to retreat from Vishnu’s body she appears before Brahma. Vishnu then awakens and slays the demons, thereby acting as Devi’s instrument in restoring cosmic order.

Here, Devi appears in her form as the ten-headed Dasa Mahavidya Mahakali. This form of the goddess is relatively rare in the Indian painting tradition, as she is more commonly portrayed in her one-headed, four-armed image, trampling Shiva. However, the present form shares many iconographic attributes with the more common form. Clad in a garland of severed heads and skirt of dismembered arms, Kali holds items representing the powers of each of the gods in her ten hands. These include a severed head, trident, bow, mace, conch, sword, and chakra. Her outstretched tongues, bared teeth, long unruly hair, large nimbus and strong stance convey her fierceness. Below, Vishnu reclines, and Brahma emerges from Vishnu’s navel on a lotus, flanked by the demons Madhu and Kaitabha. Fine lines of water and lotuses comprise the cosmic ocean, while a horizon of foliage bisects the background with a pale blue-grey sky above. This partitioning of the background reinforces the hierarchical scale of the painting and thus emphasizes Kali’s great power.

According to Hindu mythology, there was once a powerful demon named Raktabija who received a boon that he could replicate himself whenever a drop of his blood touched the earth. When the demon engaged in battle with the gods, Kali spread her tongue over the battlefield to prevent any of the demon’s blood from hitting the ground, thus facilitating his defeat. However, this caused Kali to become drunk with bloodlust, and after her victory the goddess went on a rampage. She proceeded to kill anyone who crossed her path, adorning  herself with the dismembered parts of her victims. Afraid that Kali would not stop until she destroyed all the cosmos, Shiva laid down on the battlefield in her path. Upon seeing her consort beneath her foot, she suddenly realized her mistake and halted her spree.

This painting illustrates the moment Shiva pacifies Kali, appearing in her form as Dakshinakali, the benevolent mother. Dakshinakali is typically depicted with her right foot on Shiva’s chest, while her more fearsome form as Vamakali is usually shown with her left foot on his chest. She holds a severed head and scimitar in two of her four hands and wears a skirt of dismembered arms from her rampage. Kali’s typical garland of severed heads is replaced here with a string of severed heads around her chignon, and her large, outstretched tongue drips with the blood of her victims. A pale, prostrate Shiva lays below, gazing up at Kali. By presenting Kali as literally trampling Shiva, this archetypal image demonstrates the extent to which Shiva’s transcendental power is only possible through interaction with Kali.

In the Hindu tradition, Chinnamasta (or ‘severed head’) is one of the ten mahavidyas (incarnations of the great goddess Devi). According to the Pranatosinitantra, Parvati was bathing in the wilderness with two yoginis, Dakini and Varnini, when they became famished. Parvati resolved to decapitate herself so that they may be nourished by her blood, thus embodying Chinnamasta.

Here, the goddess appears seated on a throne, worshipped by a ruler and his wife kneeling beside her, holding a scimitar in her right hand and her own head on a platter in her left. A crown sits just above her third eye, while thin wisps of hair hang loose and her tongue lolls. The goddess is adorned with pearl and emerald jewelry, and her skin is rendered a characteristic orange-red complexion. Faint streams of blood can be seen flowing from her neck to the mouths of her yogini companions who flank her. Chinnamasta’s iconography encompasses elements of both terror and heroism by way of severing her own head and then offering her blood for nourishment, ultimately symbolizing the transformations of death and life.