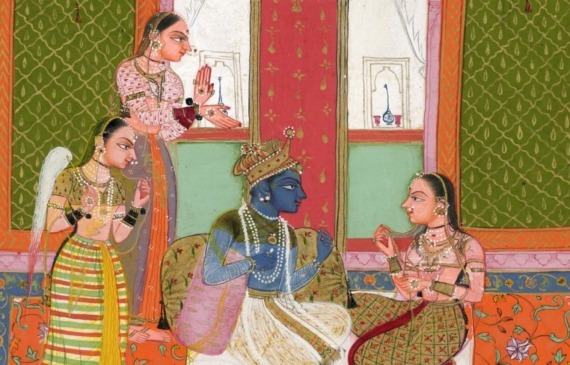 A leaf from Rasikapriya: Beauty of Radha
Bundi
Circa 1680

The present painting is an illustration of the court poet Keshav Das’ love poem, the Rasikapriya. The popular treatise, which explores the notion of ideal lovers, was composed in 1591 for his patron, the Raja of Orchha. Radha and Krishna are inserted into these narratives revolving around love to serve as the nayika and nayak (heroine and hero). This scene, identified as folio number 266, is centered around the beauty of Radha.

Similarities to the Chunar court Ragamala series, one of the early products of an apparent Mughal influence in Rajasthan (created around the time the Rasikapriya was authored) are evident: a vertical format, colorful architectural elements with white roofs, and carefully-executed landscape elements. Such qualities point to the Bundi origin of this painting as it was the next home of the likely-commissioner of the Chunar Ragamala series, Ratan Singh. The expressive facial features differentiate this seventeenth-century Bundi painting from the earlier Mewar paintings Bundi artists imitated, wherein flat figures and bold lines prevailed. 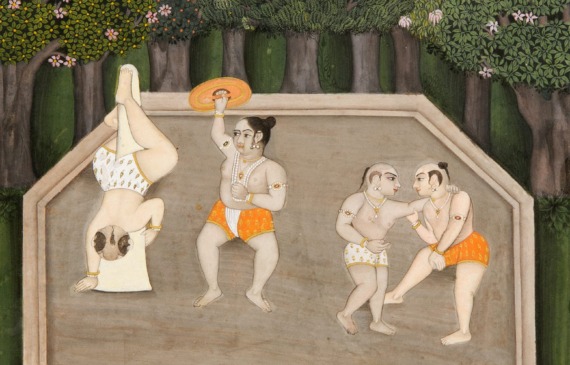 Provenance:
Property of a diplomat, acquired in India during the 1950’s.

Five men test their strength, agility, combat proficiency, and stamina by lifting weights, climbing a column and wrestling. The scene is set against a training ground surrounded by finely detailed trees with a river in the foreground. One of the men discards his equipment to practice a compulsory activity reminiscent of a push up. In the background, hills and valleys appear before a backdrop of red sky with a golden city in the distance.

The Desakh Ragini is the only raga signified by physical strength and prowess, subsequently demanding athletic iconography to demonstrate the significance of the wrestlers’ capabilities. Poetry associated with this imagery describes sights and sounds of the athletic realm that come to be represented in the current painting by the men concentrating on their exercise in order to improve their physical state of being. Scenes like this nearly always depict an acrobat on a column, as this was a segment of the melas, or fairs, that were held in villages across India wherein performers would suspend themselves upside down on a pole to flaunt their strength in defying gravity. 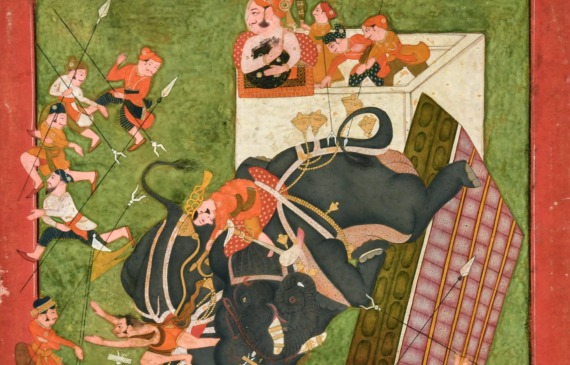 Provenance:
From a Private European Collection.

This scene depicts Rao Raja Bishan Singh watching an elephant fight from a balcony in the top right hand corner of the painting. The dramatic depiction of the tumbling elephants and figures is heightened by a strong diagonal composition and the juxtaposition of the enclosing walls.

Elephant combats were described by the French physician François Bernier during his time in India:

“A wall of earth is raised three or four feet wide and five or six [feet] high. The two ponderous beasts meet one another face to face on the opposite sides of the wall… The riders animate the elephants either by soothing words, or by chiding them as cowards, and urge them on with their heels, until the poor creatures approach the wall and are brought to the attack. The shock is tremendous and it appears surprising that they should even survive the dreadful wounds and blows inflicted with their teeth, their heads, and their trunks. There are frequent pauses during the fight; it is suspended and renewed, and the mud wall being at length thrown down, the stronger more courageous elephant passes on and attacks his opponent and, putting him to flight, pursues and fastens on him with such obstinacy that the animals can be separated only by means of cherkys, or fireworks, which are made to explode between them.” (Desai 1985, p. 53).

This painting is a later re-working of a drawing by the “Master of the Elephants” that is now in the Alvin O. Bellak Collection (Mason 2001, no. 65, pp. 158-9). The artist identified by Welch as the “Master of the Elephants” came to the Rajput court from the Deccan in the later half of the seventeenth century as part of the general migration of artists during the Mughal campaigns in the region. His fluid line and dynamic compositions successfully combined Mughal and earlier Bundi elements, developing a distinctive Kotah style that went on to influence artists for over a century. For a further discussion of the development and re-attribution of many of these elephant drawings and paintings at Bundi and Kotah, see Beach 2008 & Beach 2011.

Rao Raja Bishan Singh (1773–1821) ruled the state of Bundi from 1804 to 14 May 1821. His close alliance with the British brought him into conflict with the Maratha Empire and Pindaris who continually ravaged his state and forced the kingdom to pay tribute up to 1817. Consequently, Bishan Singh made a subsidiary alliance with the British East India Company on 10 February 1818, which brought him under its protection. He was responsible for the creation of the pleasure palace of Sukh Niwas on the outskirts of Bundi. 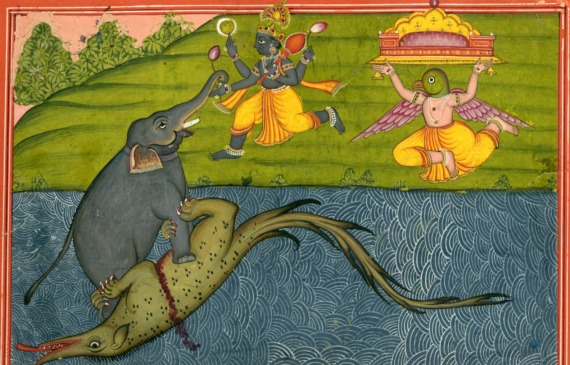 Leaf from the Bhagavata Purana Depicting Vishnu and Garuda: The Liberation of Gajendra
Bundi
18th century

Provenance:
Collection of the Marquess of Tweeddale.
Private New York Collection, acquired in the 1990’s.

Amidst a rippling current, Vishnu rescues the king of elephants Gajendra from a crocodile makara. Gajendra had gone to bathe in a lotus filled lake when the makara caught the elephant, dragging him down into the water. The elephant struggled against the crocodile with all of his strength, but with each attempt at escape the crocodile’s grip tightened. In a final effort to thwart his demise, Gajendra cried out for Vishnu to save him, grabbing a lotus in his trunk to offer to the god. Vishnu heard the elephant’s pleas and appeared alongside Garuda, vanquishing the makara crocodile demon and granting moksha to Gajendra for putting his faith in Vishnu as savior.

In the first quarter of the 18th century, Krishna became the prime subject of painting over court scenes and portraits of rulers. Towards the later part of the century, stylistic elements from the Mughal court were likely adopted through the settlement of artists from Delhi or Lucknow in Bundi, or through the implementation of Mughal aesthetics by Bundi artists. Regardless of the motivation, Bundi painting transformed during the 1700s from a heavily Rajput style to one that paid respect to the Mughal archetype while still maintaining its unique flair. The present image is representative of an earlier work, celebrating the divinity and power of Vishnu through the Gajendra Moksha narrative. The scene is meant to convey feelings of surrender and trust, essential components in the devotee’s relationship with god.

Along with a company of hunters, Prince Kishen Singh strategically attacks a tiger from atop his mount, as only well trained hunters would. An inscription in Devanagari identifies the figure riding the horse as the Prince. Rajput princes were known to pride themselves in marksmanship, one reason why hunting scenes became a popular means of portraiture in Bundi, as well as the neighboring region of Kotah. Stark green backgrounds are common in Mughal portraits of noblemen on horseback, an element borrowed in the present example. The painting is still distinctly Bundi, however, employing fragile botanicals at the forefront of the image, with contrasting diagonal lines adding to the impact of the scene. For another similar Bundi hunting scene, see R. K. Tandan, Indian Miniature Painting, 1982, fig. 112.