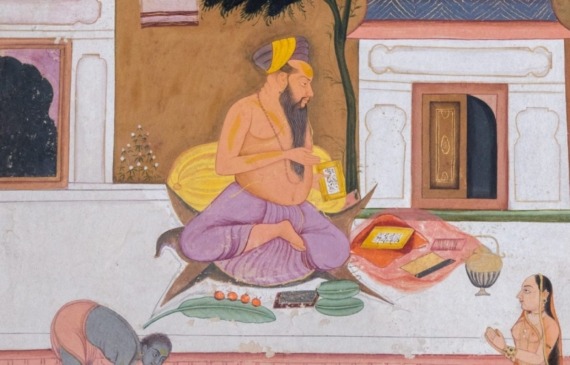 A Maharishi on a Terrace
Bikaner
Circa 1700

When Sage Vyasa meditated for a great length of time with no respite, the gods began to worry that he would become even more powerful than them. In an attempt to break the Sage’s concentration, Indra sent Menaka, an Apsara, to tempt Vyasa into abandoning his meditation. Menaka is seen wading in a sheer garment through the water towards Vyasa, hoping to break his concentration. The Sage, however, rejected her advances and cursed her instead.

All sought Vyasa’s advice because of his wealth of knowledge and wisdom. He grew up in forests near the river Saraswati, eventually becoming a teacher and priest. He is credited with compiling the Vedas, writing 18 major Puranas, and executing the Mahabharata, collection of epic poetry revered as moral law and historical cannon. When creating the Mahabharata, he dictated the story to Ganesh, who served as a scribe to complete the text.

This work is reminiscent of Bikaner painting towards the end of the 18th century, as the Mughal influence is not as strong as it is in works dating towards the beginning of the century. 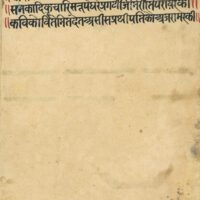 Provenance:
From an important European collection.

A third of the Hindu triad of supreme divinity, along with Vishnu the Preserver and Shiva the Destroyer, is Brahma the Creator—progenitor of the hymns and ritual texts known as The Vedas. The Brahma Purana describes him with five heads. As the story goes, he became too arrogant, referring to himself as the greatest of the Trimurti or divine triad, so Shiva removed his fifth head to humble him. In the present composition, Brahma is shown worshipped by four devotees who may represent the four Vedas: the Rig Veda, the Sama Veda, the Yajur Veda, and the Atharva Veda.

The current painting is from the same series as The Liberation of Gajendra, illustrated by Andrew Topsfield in In the Realm of Gods and Kings, New York, 2004, p. 117, no. 43, formerly in the collection of Cynthia Polsky and sold at Bonhams New York, 16 March 2015, lot 70. The series was commissioned for a Maharaja of Bikaner; it includes a variety of Hindu deities including Vishnu’s many avatars. Each of the compositions display a strong Mughal and Deccani influence.

Recto translation:
Four great gods including Sanaka are the mind-born brilliant children of [Brahma]. Although they are eternally five years old, they are indeed renowned for their knowledge. May these divine beings protect the great king Prthvisimha, who is regarded as the partial incarnation [amsaja] of Vishnu.

Verso translation:
[The name of the meter] is Savaiya. For the benevolence [of living beings], the god Brahma created the beautiful world, both animate and inanimate. Through his mental and ascetic power, he manifested himself in the form of forty incarnations including Sanaka. This is indeed beyond description. May [the creator god] protect our learned poet king [Prathipati; Skt. Prthvipati] and make him ever young and immortal. 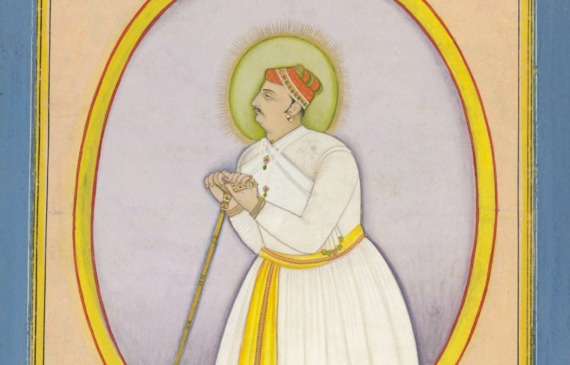 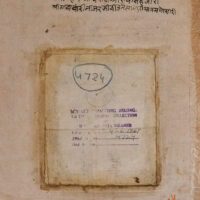 Provenance:
Collection of the Maharaja of Bikaner, 1964, according to inventory seal verso (no. 4724).

Maharaja Rai Singh (r. 1571-1611), the sixth raja of Bikaner, is depicted here in an icon-like fashion, haloed and regal. Rai Singh held high rank as a general in the armies of the Mughal Emperors Akbar and Jahangir, winning large tracts of Mewar for the Mughals. For his exemplary service, he was awarded the jagirs of Gujarat and Burhanpur. He constructed the Junagar Fort in Bikaner during his reign.

An early drawing ascribed to the artist Nur Muhammad (active 1580-1630) of Maharaja Rai Singh, executed circa 1605-1610 and now in the collection of the Cleveland Museum (see acc. 1987.1100) may have been a prototype for later paintings like the present. There-in, the raja is depicted in full, wearing an Akbari period five-pointed-hem jama. The drawing is covered in ink inscriptions that likely serve as coloristic instructions preparing for a more finished version, executed later by workshop assistants.

The present image is a posthumous portrait of the famous maharaja which would have been commissioned by a noble family of Bikaner as a gift. This type of work is sometimes referred to as a ‘nazar’ painting for this reason (see Naval Krishna, “Bikaneri Nazar Paintings Depicting Krishna,” Ars Orientalis, Vol. 30, Supplement 1, 2000, pp. 93-97.) 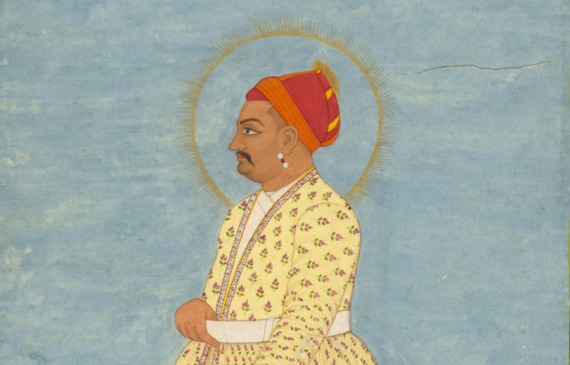 Provenance:
An important collection of Indian Miniature Paintings from a private Toronto Estate.

This portrait captures a strong, individualistic and aristocratic image of a prince in the Bikaner style from the 19th century. The portrait is depicted in fine lines and brushstrokes against a plain background instead of the typical Bikaner miniature style of court and nature scenes. The aureole around his head is painted elaborately in pure gold, which is regal, divine and emblematic of the royal portraiture during the time period. The prince is portrayed wearing an exquisitely detailed outfit covered in floral motifs. The portrait depicts the royalty and aristocracy of the prince with the fine artistic skills of the artist. The close ties with the Mughal are emulated in the portraits commissioned by the Bikaner princes. 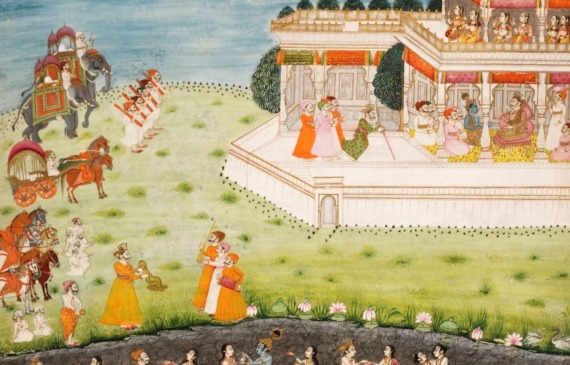 The Pandavas and Krishna Bathe in the Jamuna
From a dispersed Bhagavata Purana series, scene from Book X chapter 75
Ascribed to Kayam (Qayam)
Bikaner
Circa 1750

Among India’s rich historic and religious texts, the Bhagavata Purana evolved to be one of the most influential pieces of literature in the Hindu library, serving as the basis for subsequent worship, performance, and debate. Written to inspire devotion to Krishna between the 8th and 10th centuries, the text includes narratives of the deity’s birth and childhood, time among the cowherds, his affinity for the gopis and their unfaltering devotion to him, and the attempts by his uncle Kamsa to end his life.

One of the most important moments in the Krishna legend is when he kills Shushupala at a religious ceremony conducted by Yudhisthira, the eldest of the five Pandava brothers. After the ceremony they all bathe in the Jamuna River. We see a series of events in this painting. In the foreground Krishna and the Pandavas with their single joint-wife Draupadi and other women cavort in the river. The artist includes some charming touches with figures disrobing at the water’s edge. Musicians play, adding a festival atmosphere to the vignette in the foreground. Later in the story, the Kauravas with their army arrive at the palace to the left. Duryodhana, the eldest of the Kauravas, jealous of the splendor of his cousin’s palace is tricked by magic. He first thinks the floor is water and lifts his garment. Then what he takes for a door turns into water and he falls in. This scene is depicted on the terrace of the palace while Krishna and Yudhisthira sit in court within.

This rare leaf was painted by an artist working in Bikaner, a major center of painting within Rajasthan in the 17th and 18th centuries. The cinched waists of the figures is characteristic of Bikaner painting, as are the different levels that add depth to the composition. Naval Krishna has pointed out that there were at least five Qayams in the genealogical tree of the Umrani Usta painters of Bikaner. He refers to this group of folios as from the fourth Bikaneri Bhagavata Purana.

A thank you to Daniel Ehnbom for identifying the scene and Naval Krishna for his thoughts on the artist. For a genealogy of the artists see: Naval Krishna, “The Umarani Usta Master­ Painters of Bikaner and Their Genealogy,” In: Andrew Topsfield (ed.), Court Painting in Rajasthan, Mumbai: Marg Publications, 2000, pp. 57-64.

A light blue sky descends into a mossy green, where the background meets the horizon line of a marble terrace. Green and yellow honeycomb tiles atop the garden pavilion’s roof bring out the fluid streaks of golden clouds in the sky. Floral motifs fill the textiles and panels that decorate the pavilion as well as the large bed around which three elegant female attendants wait on a regal figure, hand and foot.

The identity of the adored male herein is revealed by his sky-blue skin and the obscured peacock feather on the proper-left side of his five-pointed diadem. Krishna’s crown style herein resembles that exactly of a Bikaner painter Ibrahim’s 1692 Rasikapriya illustration in the collection of the Brooklyn Museum of Art (acc. 81.192.3). The present painting exhibits figures with cinched waists, the use of linear perspective, and a gold-speckled border—all typical features of paintings from Bikaner, a major center of painting of the seventeenth and eighteenth centuries within Rajasthan. The inscription which appears under the lower right corner of the painted image refers to the divine Krishna in a loving Urdu epithet, “Mohan Lal.”