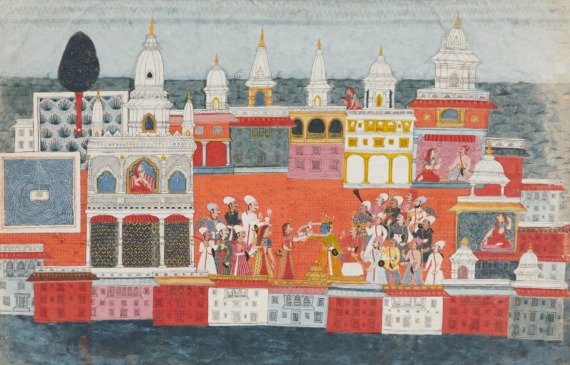 A Leaf from the Bhagavata Purana: Krishna Weds Rukmani
Nepal
Circa 1775-1780

The present painting is from an important series depict- ing the exploits of Krishna as described in Book Ten of the Hindu epic, the Bhagavata Purana. The Bhagavata Purana chronicles the ten avatars of Lord Vishnu, each of whom must save the world from danger, destroy evil and protect virtue. This painting depicts Krishna in his wedding to Rukmani, his first and chief consort who he heroically kidnapped to save from an unwanted mar- riage to the evil Shishupala.

The painting is executed in a large format, unusual among Nepalese paintings, but distinct to this known series, of which two folios reside in the Metropolitan Museum of Art (acc. 2019.64). According to the muse- um: “This painting is part of an ambitious series num- bering around 100 folios, now dispersed, which all dis- play the same dimensions, the distinctive red border and the aerial perspectives onto complex architectural constructions, features shared with the later court paint- ing of Udaipur.”

The present painting, though lacking inscriptions, seems to illustrate a portion of the Ramayana, as the three figures on the right side of the composition resemble the exiled triad at the center of the Indian epic: Krishna’s avatar Rama, his betrothed, Sita, and his brother Lakshmana. The seven sages depicted, however, may very well be the saptarishi or celestial brothers born from Brahma.

While the subject-matter is difficult to elaborate upon, the present is discernibly Nepalese, particularly in palette. The prominent bright reds and blues and heightening with gold closely resemble the pigments used in a well known dispersed eighteenth-century Nepalese Bhagavata Purana series executed in a large format of which two folios reside in the Metropolitan Museum of Art (acc. 2019.64). The crown and ornamentation style, however, very closely resemble the style of those in a circa-1700 painting from Bilaspur depicting only Sita, Rama, and Lakshmana on a red ground in the Los Angeles County Museum of Art (acc. M.87.278.10). Thus, the influence of Indian miniature painting is also evident in this unusual Nepalese illumination of a Hindu epic.