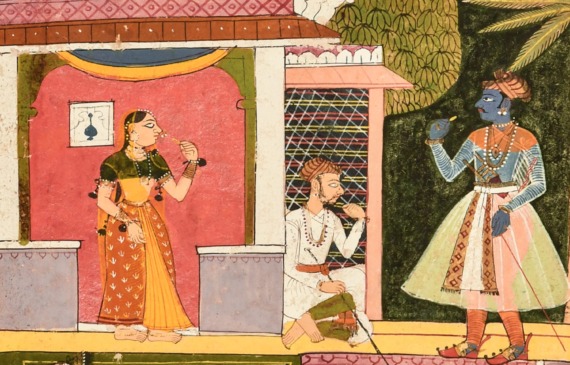 An Illustration to the Rasika Priya of Keshavdas
The Circle of Sahibdin
India, Rajasthan region, Mewar
c. 1645
Opaque watercolors with gold on paper

Keshavdas Mishra (1555-1717), Hindi poet.
Three lines of black and red ink Devanagari script in the yellow-buff panel above. The doha in a slightly later hand on buff paper applied over earlier ink text. Yellow marginal lines with black rules and red outer borders.
A blue-skinned lord stands at the entrance to Radha’s pavilion. A deaf and night-blind doorkeeper sits at the entry with his stick. Radha is lying down. Her servant stands within a brilliant crimson-colored rectangular interior room. The entire composition compartmentalized by black lines and (principally) primary colors of red, blue and yellow juxtaposed with stark whites against a rich black exterior and green foliage. The upper story of the house with lattice windows and a jutting domed balcony. The subject of this rasa is described by Dehejia (2013) as Radha’s manifest self-endeavor.
There are numerous published examples of paintings executed in this important Mewar style of the royal atelier of Udaipur during the mid Seventeenth Century. The name Sahibdin has emerged as perhaps the most innovative and distinctive artist (and likely master) of that atelier. Several sizable series are known depicting Rasikapriya (Lovers? Breviary) and Ragamala subjects in squarish vertical format as here – as well as epic series like the Ramayana in pothi (horizontal) format. So strong was his influence that name Sahibdin has been associated with miniatures attributable to his hand – and to related works by other artists within his circle – or even by artists influenced by him. The present painting most likely produced by artists working in the circle of Sahibdin within the royal atelier.
Other mid-Seventeenth Century paintings by (or in the manner of) Sahibdin are in public and private collections worldwide. See: Dehejia, H.V. Rasikapriya: Ritikavya of Keshavdas in Ateliers of Love New Delhi 2013 Cat. 5:15, P.188. Dehejia, H.V. (ed.) A Celebration of Love, New Delhi 2005, pps 130-133. Mason D. et al. Intimate Worlds: Indian Paintings from the Alvin O. Bellak Collection Philadelphia 2001 cat. 20, pps.70-71. 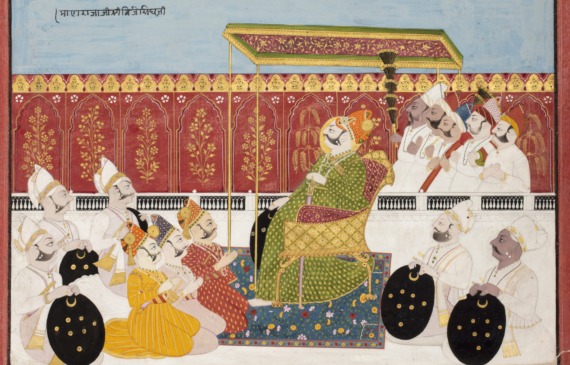 Miniature gouache painted with heightened gold depicting an Indian narwhal haloed, seated on his throne under a canopy, his hand on his “talwar” saber, the turban crowned with an egret, richly adorned with pearls and precious stones , receiving three dignitaries with allegiance. Ten servants wearing kataras on their belts, holding rondaches, or waving the “chauri” fly-catcher, frame the protagonists. The scene takes place on a white marble terrace, in a palace with walls of red walls. A registration line at the top left in black ink. 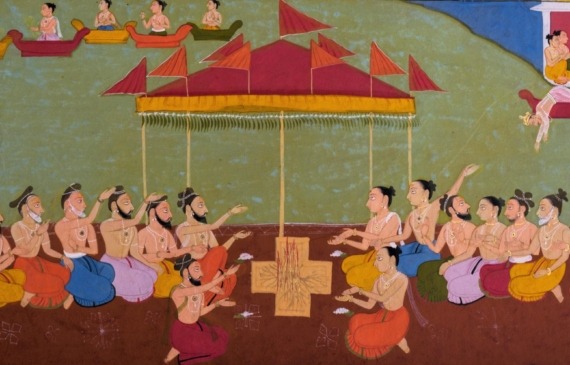 Yellow inner and red outer borders with black ruled lines. Two lines of black ink Devanagari script in the yellow panel at top. The invocation begins: Rama / Bala / … In pothi (horizontal) format. Semi-clad Rishis sit offering oblations before a ceremonial fire. Set against a verdigris hillside with auspicious symbols sketched on the red-brown ground below – under a brilliant red canopy supported by five posts – red pennants wave above. Celestial devas in their vehicles offer praise. At the upper right a king of the devas (probably Indra) addresses two holymen. Likely an illustrated folio from the Ramayana of Tulsidas – the Bala Kanda section. For a related folio (possibly from the same manuscript) see: Simon Ray exhibition catalog London 2003 cat. 43 pps.96-97 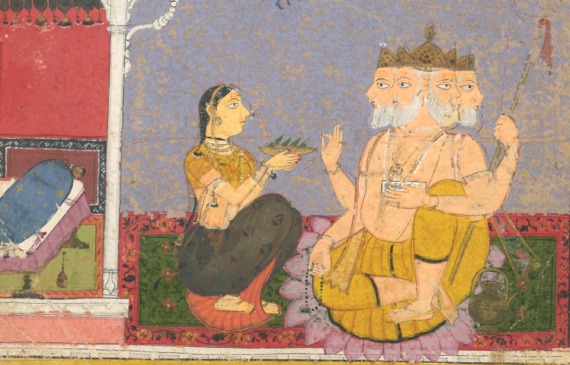 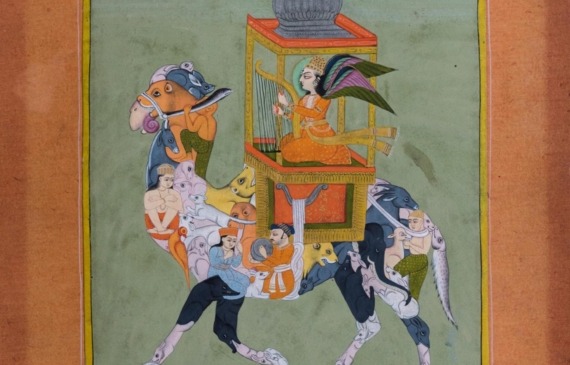 Originating from the Islamic world, the composite animal figure eventually migrated east into Indian iconography and became a popular subject in the North. These figures appeared as early as the 16th century in India, constituting a spike in creation of these composites through the 17th century. The composite figure was likely inspired by Buraq, the legendary beast on which Muhammad made his mi’raj (night journey) to paradise as described in the Qur’an. Some scholars speculate that the composite figure comes from animalistic cults that practiced in pre-Islamic Central Asia.

The rider is oftentimes a peri, a supernatural being descended from fallen angels excluded from heaven until they achieve forgiveness from on high. The peri in this composition is shown playing harp, her stunning wings of blue, turquoise, purple, and deep green unfurled behind her. The composite figure shown here takes the form of a camel, made up of four human figures and a variety of animals, including an elephant, a monkey, birds, and lions. The feet are composed of rabbits, a fish serves as the tail, and a snake encircles the face to mimic reins.